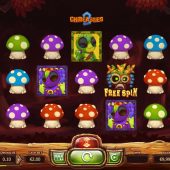 Chibeasties 2 slot is, of course, a sequel to Yggdrasil's original Chibeasties slot which was a fantasy-themed game centred on funny Wild events and equally funny little cartoon creatures of the forest. This time we dig further down into the leaf mould and enter the world of mushrooms (or toadstools?) and roots and a cave. There are 5 reels with an earthy background of a cave entrance behind them and predominantly formed of various coloured spotty mushrooms, maybe a reminder to those of you who owned the old Mario video games.

Game of gremlins
The remaining icons consist of odd brightly coloured Gremlin-type characters, and you can pick any one of their 4 Realms before playing the game. This is important as any Wild landing will behave in a certain way, depending on which you choose. The pays range from 12.5x stake for the highest 5-of-a-kind red Gremlin down to 2x stake for the lowest mushroom colour, the light green. There are scatters on all reels representing masks that seem to be influenced by another Play'n Go slot, Grim Muerto.

You can pick from the following 4 realms:

Expanding Realm - any Wilds expand to cover the whole reel.

Teleporting Realm - any Wilds will teleport into the best possible reel position to make the maximum win, similar to those in Netent's Wonky Wabbits.

Spreading Realm - Wilds will replicate to 1, 2 or 3 random positions anywhere in view.

Mirroring Realm - Wilds are mirrored against an axis centred on the position of the middle reel. If landing there, the Wild will mirror twice otherwise if landing on a single axis line, just the once.

Random Mutation - sometimes after the above has occurred, the Wild may also 'mutate' and continue to add one of the other three's characteristics to itself too, thus creating many more Wilds.

Free spin feature
Three or more Mask scatters will trigger 7, 15 or 30 free games. During these, every Wild that lands and does it's specific expansion is then guaranteed to mutate afterwards, as described above. These spins may retrigger too.

Our View...
Chibeasties 2 slot exhibits the typical high-quality Yggdrasil graphics and has an equally impressive 96.20% RTP. The theme reminds me of other slots that include these kinds of cute and quirky characters, such as Play'n Go's Energoonz or Sugar Trail from Quickspin. Chibeasties 2 has Wilds in the base game that land frequently enough to do their particular expansion, although as a result, the base game wins are pretty low in general. The volatility or lack thereof may deter some players seeking the big win thrill. Free games bonuses tend to be reasonably productive. Although again, the higher Wild count in them does little to negate the poor line hit values. A great game to recycle a balance with, but I wouldn't dig down into Chibeasties 2 world if looking to increase it significantly...