You might assume that a slot called Big Thunder would be about the Norse God 'Thor' or something equally thunderous. However, this is not the case with Ainsworth's online video slot Big Thunder, which is set in the jungle with a mighty Gorilla taking center stage. Land-based slots players may have already played Big Thunder in casinos. This one is almost the same, with a few adjustments in this 'King Strike' adaption. There are 30 paylines over 5 reels and 3 rows plus a single-symbol reel on the left of the middle row. The other symbols are waterfall, drum, and snake and there are the usual card symbols for lower pays.

The game doesn't have a musical soundtrack like many but simple noises for spinning and any wins. The Gorilla is the Wild and appears only on reels 3, 4 and 5 stacked, but is very frequent! The highest-paying 5-of-a-kind is the scatter offering 50x stake whereas for symbols it's only 5x stake, for which there is a reason we shall see in the bonus.

Three or more Big Thunder scatters anywhere trigger 15 free spins. These are unique in design and work very differently from what you may be familiar with! Firstly the card symbols disappear and the Wild Gorillas now appear singly on all reels and even substitute for the scatter. The mini-reel on the left then has scatters added as well as 3x and 5x multipliers, so if you don't hit a blank space you'll get one of those three. All wins now pay as scatter wins, but only if they fall on one of the 30 paylines, bar the scatters themselves. Confused? It's actually quite simple - you win if any 3 similar symbols/Wilds fall on any payline in any position. You don't get retriggers for the whole 15 spins, but any 3+ combination of scatters/Wilds anywhere will add 8 extra spins. You can now hit 200x stake for 6 scatters if you land the scatter on the end single reel! You could also hit 5 scatters on the reels with a 5x multiplier on the small reel for a 500x stake as scatter awards are double in the bonus. The game is very much centered on free spins.

Big Thunder is a great addition to the Ainsworth range of online slots. It has a lot to live up to when compared with other slots from this developer such as the very-playable Eagle Bucks or the highly-rated Grand Dragon, but holds its own with ease. A reasonable 94.38% RTP and the free spins aren't too hard to trigger which is fortunate given their apparently significant contribution to the slot's overall returns. The potential for big hits is there too and the sounds are quite tolerable for the long session, not forgetting you have jackpots to play for as well! Maybe it's time for my rumble in the jungle... 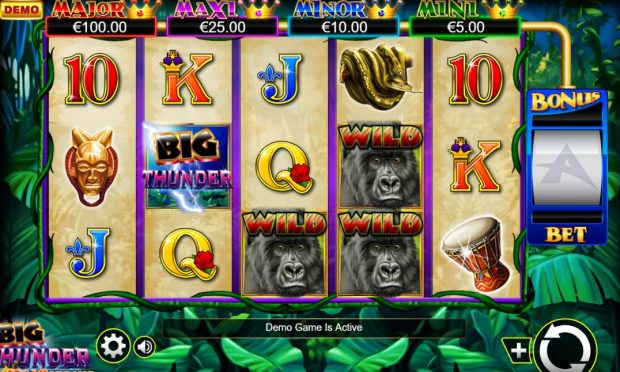