Electric Nights slot certainly looks the part as we open it to a glossy reel set with a background showing the bright lights of a Vegas bar and transparent reels so we're not deprived of the view. If you've played Big Time Gaming's Danger High Voltage! then this theme won't be new to you and we get the usual Ainsworth click-and-trot sounds as we spin but also some blasts of music when certain symbols land and some colorful animations. Like their Big Thunder slot which you may have played in land-based casinos, we get the King Strike internal jackpots here too so can your bankroll get lit up like the bright lights of Electric Nights?

Five reels of three rows each and 30 paying lines are the format for Electric Nights and its logo is the scatter and highest-paying symbol at 100x bet for all five in view. You pay 30 coins to spin and the Hotel pays 300 coins for a full line of 5, gold 7's 200, Neon Flower and Vegas Balloon 150, Neon Cowgirl 125, and finally the six card values award 100 for A, K, Q or 50 for 9, 10, J. There are stacked $ Wilds on the last three reels only as is typical of most Ainsworth games with reel 5 seeming very frequent. If any Wild lands fully you are treated to a blast of music and lights too.

The King Strike Jackpots are internal, not progressive and they are fixed amounts situated above the reels:

Three or more game logos in view triggers 10, 15, or 25 free games and during which reel 5 is a Wild reel. The pays remain the same unlike many Ainsworth games and aren't reduced you cannot see the 5-scatters award here, but 2 in view will award 5 extra free spins. You cannot win the Maxi and Major jackpots though, only the Mini and Minor ones in this bonus. The good thing is that when you do win a King Strike award you get it for every paying line so when the last 3 reels are full of Wilds and you do hit the Gold Token, you may find the jackpot paid 4 or 5 times although that can only happen in the case of Mini or Minor which are paid for Wild wins.

Electric Nights is a jolly decent slot to be fair, despite the RTP of 94.13% is in the low range of what you'd usually see nowadays. The graphics are crisp and glossy as are the animations and the base game is slightly tighter than many Ainsworths but the free games can be very lucrative, especially when landing the King Strike which is far more likely with the 5th. reel being Wild. So we have a slot that doesn't have the tedium of low volatility from Ainsworth for a change, and it certainly did light my night up... 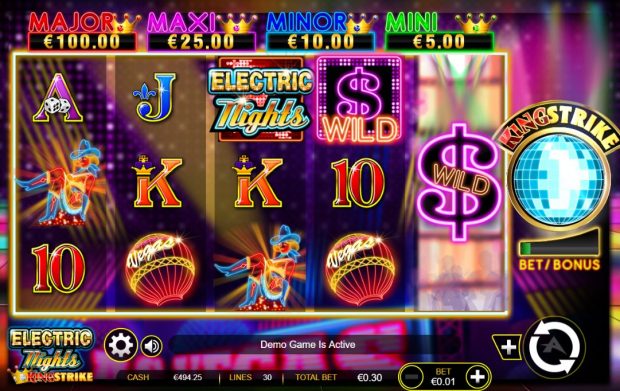