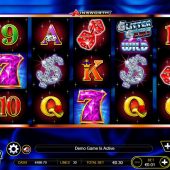 Glitter Gems slot may indicate by the name that it's one of those Starburst type games but fear not, it reflects the usual Ainsworth format with free games and a casino theme as you may have seen before on their Electric Nights and Stormin' 7's titles. Riches are suggested by the blue silk background and transparent reels displaying gems and sparkling jewellery and the slot wouldn't be complete without the familiar trademark ratchet-and-trot Ainsworth sound effects as we play. We know gems don't come cheap so can these ones actually add some glitter to our bankroll?

On the reels...
Glitter Gems is not unusual in that we have the 30-paying lines and 5 reels of 3 rows format, but appears immediately to be more volatile than the games our Australian friends usually produce. This can be evidenced via the paytables where you can earn 100x bet for 5 Blue Diamond scatters, 33x for Red 7's, 10 for Purple 7's, 7x for the Diamond $ or Dice, 5x for the Yellow Diamond with six card values all paying 100 coins for our 30-coin bet for a full line. The Glitter Gems logo appears stacked on reels 3, 4 and 5 and if familiar with Ainsworth games you'll know they love to put their stacked Wilds on those reels so that's what the logo is!

Glittering bonus
Should you land 3 or more Blue Diamond scatters anywhere in view you are awarded 8 free games which cannot be retriggered but you will get 5 extra spins for 3 or more scatters appearing in them. There are a few enhancements too: the pays are doubled for any wins including Wilds, the Wilds can now appear on all 5 reels and finally the Red and Purple 7's now pay mixed, awarding 250 coins for 5-of-a-kind. You could theoretically see a screen of Wilds which would award 1000x bet assuming they award the same as the top pay for the Red 7's.

Our View...
Glitter Gems slot is more volatile than the usual Ainsworth math model and you can see this by the absence of paytable reductions in the free games, which you find on their games sometimes when multipliers are possible in the bonus. The RTP isn't great at 94.25% which is again typical of the usual value for Ainsworth but the base game can award good pays and as a result wins are less frequent. The graphics are glossy and animations good though and it's refreshing to see a higher-variance game from them. I wouldn't call it a gem of a slot but it had a certain amount of sparkle to it....