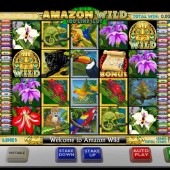 Amazon Wild is a slot released by slot developer, Ash Gaming, with five reels and 100 paylines. But while the pretty graphics and tropical theme should attract most players, the minute you begin to play this game you will definitely have a feeling of déjà vu.

Ash Gaming have gone down a trusty path with this slot release  by using a theme that has already been covered by other developers such as WMS Gaming with their re-released Jungle Wild slot and Betsoft Gaming’s ancient civilization-themed Aztec Treasures.

Symbols on the reels include panthers, frogs, lizards and monkeys: basically, all the sort of animals you might associate with the jungle. One stand-out symbol during regular gameplay is the Wild Indian mask symbol. Obviously, this game is called Amazon Wild so the presence of a Wild symbol is mandatory! This Wild symbol will substitute for all other symbols except for the Map Bonus symbol to complete winning combinations.

This slot is set in the Amazon jungle but also using symbolism from the Aztec era (hence its similarity to Aztec Treasures). The Aztec symbols play a key role in this slot in triggering the main bonus feature. You will need to hit three or more of the Map Bonus Scatters across the reels in any position in order to trigger the feature. When the feature is triggered you are taken to a screen showing a map with Aztec temples scattered across it. You must then select a number of the Aztec temples on the map to reveal prizes. The number of Aztec temples you can choose depends on how many Map Bonus symbols you initially hit across the reels to trigger the bonus feature.

Amazon Wild is a simple game, to put it bluntly. The bonus feature does not require a degree in Archaeology and you don’t need to be Indiana Jones to work out where the big payouts come from. However, it could be argued that this game is too shallow. The length of appeal of this slot wears thin after a short time, although it might be fun to play over a short period of time. There is always the constant appeal of the 100 paylines, however, and that is enough for a lot of players to keep coming back for more.