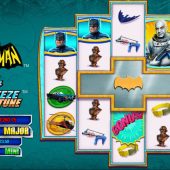 Batman and Mr Freeze Fortune joins the ranks of other Ash Gaming/Playtech's DC Comics slots, such as Penguin Prize, Catwoman Cash and Riddler Riches. 2016 has seen a slue of Batman-themed slots, based on the 1966 Batman film, but in fairness, to the developer, they have all been quite distinctive from each other with different characteristics and characters.

The reels are arranged weirdly as you can see in the screenshot, but there are effectively 5 reels and 4 rows in a 1024-way format. The 5 Polar positions in the centre we will visit later in the review, but they aren't relevant in the base game. You get Mr Freeze stacked as he is the premium symbol along with Batman and Bat Wilds on all reels which have no multiplier. There are of course the obligatory movie sound effects and captions during the game which fortunately aren't too harsh.

In-Play Random features occur, and there are 4 of them including the win multiplier which may multiply any win you get on that spin up to 10x, and Wild multipliers which may enact up to 5x on your spin if the Wilds count. You may also see the two protagonists fight over the reels leaving up to 6 single Wilds scattered about and finally Mr Freeze may cover reels in himself which all transform into the same (hopefully useful!) symbol.

Should you land 3 bonus scatters in view you are rewarded with 10 free games. In the free spins, the centre 'Polar' block becomes part of the reels, thus increasing the ways from 1024 to 2400 by adding extra symbols! Mr Freeze will also guarantee a multiplier on any Wilds of up to 5x in every spin, similar to the occasional random Wild multiplier feature in the base game described above.

The Batman Series is almost becoming an encyclopedia of slots as Ash Gaming maximise their use of the DC Comics license. Having said that, all Batman slots are quite different, and the RTP of 96% is very decent although 0.99% of this includes progressive jackpot contributions. It's not a case of "You've seen one, you've seen 'em all" for certain, and the low-medium volatility ensures a decent session for your stake along with a potentially generous free games bonus. I'm certainly cool with Mr Freeze...