Batman and The Penguin Prize slot 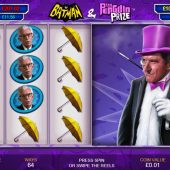 Yes, another edition into the Ash Gaming/Playtech library of DC Comics branded slots and perhaps the most unconventional of the series. As you may have guessed The Penguin is Batman's sparring partner in this game - when you realize how it works you may think like I do, that it was actually something created by The Riddler!

As you can see from the screenshots of Batman and The Penguin Prize has a bizarre set-up. Let me start by stating that as normal the two highest-paying symbols are the characters themselves and all symbols appear in stacks plus single Wilds. There are no scatters which makes this unique in the DC Comics series, because the extra games come in the form of in-play respins and not a conventional trigger. The top symbols only pay 10 - 20x stake with Wilds being the highest down to Batman at 10x for 5-of-a-kind.

So, you will notice a small 3-reel 4-row slot on the left with a large shrewish-looking Penguin stuck on the right. This small slot is 64-ways and is the basic game, but any win will remove the Penguin from the right and award a spin on that reel set, another 64-way slot. You will be awarded any win occurring to be added to the one gained initially on the left-hand reel set.

If in stage 1 above, and only! If you got any Penguin to win on the right-hand game, you trigger the stage 2 respin. This is where it becomes interesting, as you will see the whole game split into 3 reels each 2 symbols wide and these will have Colossal Symbols added of the Penguin especially in a 2x2 block. The slot effectively becomes 4096-ways! You need a Penguin win on at least the first 2 wide reels to trigger stage 3 respin.

This will be your last spin of the series and potentially very lucrative as you are getting 2 reels each 3 columns wide with giant 3x3 colossal symbols on each of the 2 reels in the form of the Penguin. Should you land 2 together then that would produce a monstrous 729-ways of that symbol across the 6 reels - I told you the Riddler invented it!

Due to the potential of the third respin Batman and The Penguin Prize slot is quite volatile despite the 96.06% RTP and most wins tend to be small if not getting to at least the stage 2 respin. The constant animation of the Penguin on the right-hand reels every time you get a win on the left becomes quite tiresome, quickly. The game design is unique and can't be faulted for lazy programming like many, but this slot is really for aficionados of high-risk big-reward games. It'll be risky diving with this Penguin...

If you want something similar, but a little less volatile, then there are several other slots in this series, such as Batman and Catwoman Cash or Batman and the Riddlers Riches.