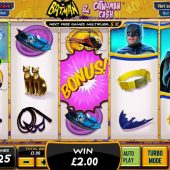 We are seeing the reintroduction of DC Comics' classics and the first of these to find its way online is Batman and Catwoman Cash. Authentic characters and clips from the original films accompany the reels and features of this 5-reel, 3-row, 25 payline slot. For those that have seen the old Batman film, the soundtrack will instantly jolt some nostalgic memories of the caped crusader. By the way, this is just one of several new releases featuring Batman Jokers Jewels and the Batgirl Bonanza slot.

The premium characters of Batman, Catwoman and Robin appear stacked but we have no Joker!  He is saved for the other game of this dynamic DC duo, Batman and The Joker Jewels.  There are single non-multiplying Wilds on all reels and before we get to the bonus rounds, there are a couple of interesting in-play features.  The developers have obviously felt the frustrations of players getting two useless scatters when needing three for the bonus game, so have introduced some fun for when the first two symbols land on reels 1 and 3 land, but the third on reel 5 doesn't come in. There are also single diamonds on the reels which when landing will award anything between 1 and 5x stake each, so a spin with no winning line can still produce a result.

On Batman And Catwoman Cash slot, should you get two scatters on reels 1 and 3 and not the third on reel 5, you will get to choose one of them as a sort of runners up prize. This will reveal either a cash amount of between 1-10x stake or a reveal a multiplier to be added to the one you will use when you trigger the free games. This is displayed above the reels and begins at 1x. You can attain up to 10x multiplier before the free spins arrive. If this occurs, you still get a cash win as the two scatters then transform to the cash diamonds each awarding a prize.

As well as landing the pink scatters on reels 1, 3, 5 you can actually trigger free spins from the two-scatter pick as described above. This usually occurs once you have built up the multiplier 5x or more. When triggered, you choose one of Batman's boxes for the spin amount, 7, 10, 15 or 25 and Catwoman's boxes which will contain a symbol that will become super-stacked for the duration of the free games. There's no retrigger but should you pick a decent symbol from Catwoman and land 3 or 4 reels with a decent multiplier in play, rewards can be quite good.

Batman and Catwoman Cash slot is decent in the base game and maintains interest due to the diamonds and two-scatter picks which occur frequently. The bonus round has very good potential and the variance isn't too high either. You can accumulate good multipliers before the free games occur and the graphics and authentic movie clips make the whole experience that much more enjoyable. Try and get all the features, once you've Gotham all I'm sure you'll join their battle...