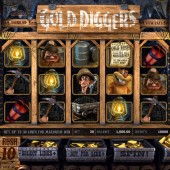 If you’ve tried out Betsoft Gaming’s lovely 3D effort, Black Gold – a celebration of the oil prospectin’ era - you’ll get a kick out of Gold Diggers, their Dukes of Hazzard-esque trip into the heart of American gold prospecting.

The slot takes us back to 1849 California and two goofy brothers who head way out west to find their fortunes.

With a sexy female assistant in tow (who looks like a bizarre mash-up of Pamela Anderson and Daisy Duke), they head into the mines with nothing but a trusty pickaxe, some dynamite, and a prospecting pan for company.

Along the way in this 5-reel, 30-payline slot, we get to see a minecart, some oil drums and a greedy gopher trying to upset the whole darn operation. As you’d expect from a Betsoft Gaming 3D joint, there’s some slick gameplay, smooth reel movements, and a nice harmonica tune playing in the background.

If you think those dynamite sticks are there for something else other than show, you’d be right. Three or more dynamite stick symbols on the reels makes them explode, causing the symbols above to drop into their place in true Cascading Reels stylee.

Pick Your Win in the Gopher a Dig Bonus

Hit three or more gopher symbols anywhere and you’ll trigger the ‘Gopher a Dig’ feature, which is essentially an instant win Click Me bonus.

Three or more Gold Rush posters on the reels triggers the slot’s main bonus game. An expansion on the Pick ‘em Bonus game, help the miners choose areas of rock to smash with their pickaxes. Keep hitting until you hit the ‘collect’ icon.

The slot is nice and slick, although with the lack of a Wild, I would have liked to have seen a free spins bonus to substitute. As it is, there are probably better bonuses to be had at other prospecting-themed slots like Black Gold or the high-octane Boom Brothers slot from slots developer, NetEnt.