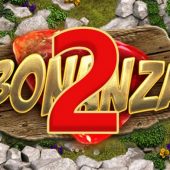 It was fair to say that Bonanza slot was a 'game changer' of a slot game. It re-wrote the rule book in terms of volatility, paylines and player expectations from a video slot. So that has led to calls from players to see a Bonanza 2 slot released.

The problem as always with a sequel slot is that it normally has a lot to live up to and therefore can detract from the original success as was the case with NetEnt's Twin Spin. The original was a really popular slot, but the follow up Twin Spin Deluxe was a bit of a let down to fans of this game.

However, if done right, sequels can be a real hit and as in the case of Thunderstruck. Plenty of slots fans believed their was no topping Thunderstruck, until developer Microgaming released Thunderstruck 2. It was an instant hit and has gone on to become one of the most successful online slots for the company.

What we do know about Bonanza 2, should it come out, is that it will likely be highly volatile and will offer thousands of ways to win. Developer Big Time Gaming will need to come up with some innovative new features to keep the insatiable appetite seen with Bonanza slot going. We look forward to seeing what they come up with.