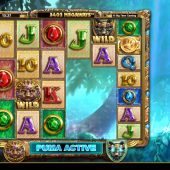 King of Cats Megaways slot by Big Time Gaming will certainly not have you saying "I've seen all this before from them..." That's because it's a dual-mode slot and their first time using this new mechanic 'Player Select'. You retain many standard Megaways facets here with maximum ways the same as Bonanza slot for example and its successor Extra Chilli slot. The reels here have familiar symbols and we can have a background of steamy jungle or the African veldt depending on which mode, with some soft tribal-influenced music as we play in both cases. So can we claw in a profit for our bankroll here or will we feel the full ferocity of these big cats?

You don't have a top scroll of 4 symbols here on King of Cats Megaways slot but still get 2-7 rows per reel on a random basic hence 64-117649 ways are possible each spin. Symbols aren't stacked but you can see more than one of the same per reel depending on its size and winning tiles aren't removed in tumbles. In this respect, it's very much like Holy Diver slot. The 6-of-a-kind pays are 25x bet Purple Gem, 4x Red, 15x Blue, 1x Green with six card values of 0.8 down to 0.4x for any full way. You have Paw scatters on all reels and Puma or Lion single Wilds can land on the centre 4 reels only. These are what the 'Player Select' option is all about, which you can change at any time.

Lion Mode - you land Puma Wilds and they are, well, just single Wilds. Land a Lion Wild and this will transform to either a 2x2 Colossal Wild working out at 4x, a 3x3 at 9x or even a 4x4 at 16x for your winning ways. You can land both types of Wild in the same spin.
Puma Mode - again, you land Lion Wilds and they are, well, just single Wilds. Land Puma Wilds, of which you can get a maximum of 3 in any spin, they expand to fill the reel and offer up a 2, 3 or 4x multiplier therefore 64x is the best on any winning ways running through.

King of Cats Megaways slot has a RTP of 96.70% in Lion Mode and 96.72% in Puma Mode. The base game is really quite good due to frequent occurrences of Wilds although the Lion 4x4 is very rare as is getting 3 Puma Wild multiplier reels on the same spin. Despite only needing 3 scatters, free games aren't usual, I would say around every 400-odd spins is near the mark. As usual, these BTG bonus rounds are very
volatile and ending up with say 10-20x is not unusual. Of course, this allows the maths to permit free games returns of several thousand times bet and we are told it hit over 56,000x in testing. I'd like to see that! I think you'll like trying to be king of the jungle or the plains yourself...