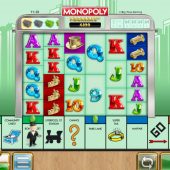 Monopoly Megaways slot by Big Time Gaming is based on the Hasbro board game license like numerous others. These have had varying degrees of popularity with players, the most recent being Monopoly Grand Hotel from Bally. Here we get some boppy jazz music with reels set over the traditional light green skyscraper background of the Monoply image and the Old Man interjecting with his comments as we play. I can promise you that this will be unlike any Monopoly slot you've ever played, so will it be a case of Old Kent Road or Mayfair for our bankroll?

We don't get a scrolling line of 4 symbols above or below the centre 4 reels here so we have 64-117,649 ways possible on any Monopoly Megaways slot spin. Symbols appear stacked and singly with 'M' Wilds single on all reels bar the first. Reels can show 2 to 7 tiles each and the top 6-of-a-kind is the Top Hat at 50x, Battleship 5x, Car 1.5x, Dog 0.9x with six card values paying 0.6 down to 0.4 for each full way of 6. Winning tiles are replaced from above in a cascade as usual. There's no scatters here because as with Holy Diver slot you have a progress bar along the bottom for modifiers and a progressive trigger and as with Kingmaker Megaways it can pay you to wait longer for the trigger!

Unsurprisingly we get the little Monopoly Man in his bowler hat walking along all the locations you get on the real board game as we play. He only moves when we win and will move along for each winning action. What he collects is important here, there's no 'minus' prizes or cash wins, it's all about the locations.

Houses - bove the reels you'll see houses on the left, 2 Utilities and the 4 Stations on the right. Houses can only be added to the coloured properties on the board the same as if you were playing the game at home, only when he lands on them and from the second winning action onward on a random basis of 0-4 houses. In other words, within one spin you need 2 or more winning actions and to move to a property after them to get a chance of houses.

The Stations and Utilities - are simply collected as these are important in the free games as we'll see.
Chance - this will move you along to another coloured property and add 1-4 houses, or make the next paid spin a full 117,649 Megaways or trigger the free spins.
Community Chest - will just move you along to a coloured property and maybe add 1-4 houses.

Well, the last thing to complete the Monopoly game is the classic Red Hotel and you earn this by getting a 5th. house added on any property along the board trail. Now you get 8 free games and this where the Stations and Utilities come into things. For each Station collected previously an extra spin is added, for each Utility 1x to your starting multiplier. You play with the increasing multiplier in the free games but not as you know it!

Chance - either a Megaways spin, 5 extra spins or move along to a random property. Community Chest does nothing bar move you along.

After the bonus, all collected Stations and Utilities are removed but unused houses remain. This bonus can go on a while, if you're lucky!

Monopoly Megaways slot is a brilliant fusion of board game with Megaways and really works well. It's colourful, interesting and the base game really pays quite well and doesn't sap your balance too fast at all. The RTP is a good 96.50% and the game play isn't tiring nor the sounds too overdone. The Chance Card mostly awards a Megaways spin until you get into the bonus with the multiplier in play and then tends to move you along or add 5 spins, surprise, surprise! Nevertheless you have some serious potential in the Hotel Bonus but be prepared for wins in 10 to 100x range mostly as this pays for those mega wins which sometimes occur. This game could really end up monopolising your Megaways play once you've tried it...