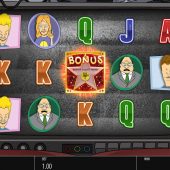 Beavis and Butthead slot by Blueprint Gaming will grab those of you around in the 1990's when MTV came up with these heavy metal-loving cartoon teenagers who had a puerile sense of humour, which invariably got them into several scrapes. Blueprint do favour licensed themes although they all tend to be variations of the same mechanic, such as The Goonies, Austin Powers and Ted but at least it's not another Megaways! We have the reels set over an old style TV set with the flatulent and belching pair either side of it and for some reason soft jazzy music as we spin, so will our bankroll crash like one of their schemes - or not?

Beavis and Butthead slot is a 20-liner and as I inferred above it pretty much uses the same mechanic as most, with various triggered features and random modifiers. This means the symbols are single except the top-paying game Logos which can appear stacked. You get Wilds on all reels which pay 25x for 5-of-a-kind same as the game Logos, Beavis or Butthead 15x, The Hippie or Teacher 10x and four card values at either 5 or 2.5x for a full line. Bonus stars appear on all reels too but as you might expect there are numerous random modifiers before we get to the main feature.

Die Fly, Die! - Wilds can randomly overlay symbols.
Cornholio Wilds - Any reel can be turned into a stacked Wild.
Colossal Couch Fishing - 3 adjacent reels can be turned into a Colossal Reel of 3x3 symbols.
So Nacho - Nachos are mystery symbols when appearing.
Butt Flambé - Additional scatters are added to the reels.
Some Like It Hot – Guarantees you a big winning spin.
Cascades - winning icons may disappear to be replaced by more from above.
Change the Channel - reveals a win on the grid after a losing spin.

You need 3 or more Star Scatters to trigger a pick-me from 5 TV sets which will award one of the 5 standard bonus games, which rank from worst to best. You can gamble you result for the next one up but if you lose, a cash award is give and no feature!

Don't Be A Buzzkill  - pick Beavis or Butthead to reveal either Cash Add which is a stake multiplier or Buzzkill where you fill the Kill-o-meter for cash amounts.
Customers Suck! - pick food boxes which give bet multipliers, you may upgrade too or get Gold Burgers for another feature. Worm Burgers end the feature.
To 'B' Or Not to 'B' Free Spins - on each spin either Beavis or Butthead will be turned Wild. Star overlays on the reels can fill a meter which will can get you Super Spins where both Beavis and Butthead are Wild or even Just Deserts which is the top feature.
Maxi Mart Free Spins - a Maxi Gulp Wild can land in view. On any future spins if a new Maxi Gulp Wild lands in view then any previous reel positions where a Maxi Gulp Wild had landed in view will also turn Wild again for that spin. You also get the overlays again where all the Maxi Wilds reappear for up to 3 respins or the Just Deserts can be reached too.
Super Cornholio Free Spins - Cornholio can appear from any toilet cubicle, turning reels into Wilds. Overlays can retrigger the feature or reach the Just Deserts if you're lucky.
Just Deserts - collecting 5 overlay symbols, gambling to, or having revealed the Just Deserts Bonus triggers a trail game. Icons reveal numbers to progress and collect cash multipliers as you go. Get to Super Big Money at the end to pick a Super Big Money Multiplier which is added to your feature total.

Beavis and Butthead slot always has something going on but as I said in the introduction when you've seen one of these trademarked 20-line games you've seen them all. Nothing new here aside from the theme which has been done well to be fair, especially so if you remember and actually liked the original show. The top feature, as with the other slots, nearly always awards 150x which is poor considering how rare it is to reach it. The RTP isn't great at 95.49% but I can't say it isn't fun, because it is. If you value fun when slotting then you'll enjoy it, if you want big hit potential then you're better off elsewhere...