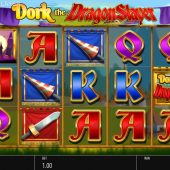 Dork The Dragon Slayer slot by Blueprint Gaming is a rather silly medieval cartoon-themed game but at least it isn't yet another version of their generic 20-line mechanic used by Ted, Beavis and Butthead or Austin Powers. We hear some music of the era as we open the game up over a background of a jousting arena which we can see through the translucent reels, then get some ridiculous comedy sounds when various wins appear. So will we add some groats to our bankroll here, or will we feel like dorks ourselves after playing it?

As said we have 20 pay lines on Dork The Dragon Slayer slot and the first of the differences I alluded to is that the reels are single independent symbols which disappear when wins are paid, to have more tumble in from above. On the left of the grid is a pole with 3 inane dragons on, which get crossed off each time a tumble occurs in the base game. The 5-of-a-kind pays are Wild or Logo at 25x stake, Castle 10x, Sword or Lance at 5x with four card values of either 2 or 1x for a full line. There are no scatters which we will soon find out aren't necessary, but before that we have the usual Blueprint random modifiers to see.

You can get one of three when the Dork Knight charges across the bottom of the grid to do his Dork Joust.
Wanted Wilds - a Stacked Wild symbol is dropped onto the reels. If it makes a win, it will work as any other cascading symbol.
Fireball Wilds - A dragon flies past the reels and shoots certain symbols turning them into wilds.
Scorched Reels - The reels will be scorched which reveals a different set of symbols, guaranteed to bring in a win.

We don't need scatters as if you recall the pole I mentioned, you'll get to the top of it when getting 4 or more winning tumbles on any paid spin. You'll see Dork on the left of the reels and the dragon on the right. You begin unlimited Free Spins which continue until Dork is defeated or he has defeated all his dragon enemies. On reel 3 a Dork appearing takes some life from the Dragon, and a Dragon vice-versa. A Shield will offer you one use to protect you from the next Dragon attack. A poison vial kills the Dragon altogether and each Dragon killed increases the multiplier 1x, so if you kill all of them you then get an extra Hero Spins free games bonus of up to 9 spins on a 5x multiplier. Good fun.

Despite the daft appearance Dork The Dragon Slayer slot is a decent enough game to play with some fun modifiers and what can be a long and profitable free games round, when it finally triggers. The RTP is not great though at a rather low 95.10% although this shouldn't detract from all but the longest sessions on the game. Blueprint do inanity quite well it has to be said so I did actually forget the appearance and sounds once I got into the slot. I may well return for another joust with the Dork...