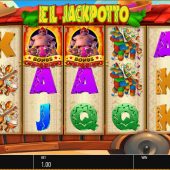 El Jackpotto slot may infer large prizes by its name, but alas it is another testament to Blueprint Gaming's flatulence obsession. Not satisfied by the emissions of our cuddly friend Ted, we now see a Mexican character that also needs a serious look at his diet and manners! Not a great start but I must report too that Blueprint have reverted to the over-used game model which we have seen far too much now, not only with Ted but King Kong Cash and numerous other slots. I thought we may have turned this corner with some nice htlm5 games of late, most notably Thundercats, Angel Princess and Pegasus Rising but no, here is a copy of a copy of a copy.

On the reels...
Fortunately we are spared the generic Spanish-style guitar and trumpet music as we play and only endure a short blast of it when a win appears - otherwise the cartoon graphics and animations on the reels just stop with a gentle tap. There are 20 paying lines over 5 reels of 3 rows each as per the format and we have 25x bet for 5-of-a-kind Chilli Wilds or the game logo which appears stacked on all reels. The Muerto Skull and Gold Belt award 15x, Guitar and Fireworks 10x with four card values paying either 5x or 2.5x for a full line.

Anyone for a burrito?
Yes, the fat Mexican bloke called El Jackpotto randomly appears and says the above line in a bad accent. He may do nothing (yeah Blueprint, a really good idea) or award a random benefit to the spin:

Tomato Sauce - El Jackpotto splashes the reels with Tomato Sauce which runs off to reveal a mystery symbol.

Colossal Fart Spin - El Jackpotto farts on the reels to make a colossal symbol to appear which could be the bonus and trigger the feature.

Bonus Boost - El Jackpotto farts on the reels to add many more bonus symbols, which may or may not trigger the bonus.

Burning Hot bonuses
You have the usual 5 bonus rounds possible with this formula from Blueprint and can gamble the one your Bonus Wheel stops on. You go to this Wheel after 3 or more Bonus Scatters appear anywhere in view, possibly after getting the them spin in after the Green Cloud of fart gas described above. Now if you get a 4-scatter trigger the worst feature, the Pinata pick-me imaginatively called 'Spank That Ass' is removed from the Wheel, and 5-scatters will immediately award the highest and best Big Money feature.

Spank that Ass Bonus - pick a Pinata to begin the feature and then eliminate more until a prize is decided. El Jackpotto may make you an offer to improve the amount, or you can refuse it and carry on.

Pound for Pound Bonus - pick from Bronze title belts, if you get to stage 2 pick from Silver title belts and to Stage 3 pick from Gold belts. If you reveal a burrito you will go to the Big Money Bonus.

El Jackpotto Rocket Free Spins - 5 Free Spins. El Jackpotto can appear next to the reels with a rocket strapped to his back (not where I'd have put it) which may detonate to reveal some Wilds. No retrigger.

Big Money - El Jackpotto is by the side of a set of reels which spin and the you collect Ultimate Luchador Champion Bonus symbols. The more you get the more money you earn. After each spin pick a pinata, revealing either 're-spin' which gives the values again, or 'collect' ending the feature. If you collect enough, you get to spin the Prize Wheel with substantial x bet values!

Our View...
El Jackpotto slot is a completely unnecessary copy of several existing slots with a stupid theme to boot. Yes, we see the decent 96.00% RTP, the fun of the random events and multiple features to try for when the bonus triggers but really Blueprint Gaming, how many times??? Is BluePrint the new Microgaming? I can add nothing more other than I will never, ever get close to this character's bouts of wind again...