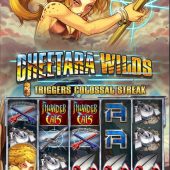 Thundercats slot has a trademark theme based on the Warner Bros. cartoon of the same name and that is no surprise from Blueprint, the providers of many other licensed slots including Ted, Top Cat, Viz and Worms. Now the reels are set against a tall background due to reels expansion which we'll come to soon and the background will have a randomly selected Thundercat on when you open the game and you'll hear the music from the cartoon while you play. This gives the slot an odd and rather narrow elongated appearance, but more importantly are these Thundercats going to get their claws into our cash?

On the reels...
As said above, your game will have the appearance of one of the four characters when opened and the in-play random events will be specific to them. They are Lion-O, Tygra, Cheetara, Panthro and Wily Cat. We pay 40 coins for 30 paying lines over 5 reels of 4 rows each and all symbols appear stacked, and your Thundercat is the Wild appearing singly on the reels.

All five of the Thundercats reel sets have the same pays for 5-of-a-kind wins: Wild or game logo 10x bet, Dagger or Cross Hands 5x, Robot or Surf Boards 2.5x with card values either 2x or 1x.

Snarf can appear in-play and make the Thunder Reels 8-rows high for the spin (hence that extra space above the normal reel set!) and make a losing spin into a win, improve any modifier that is active (these can appear on reel 5) or add lots of extra bonus scatters to the reels.

Modifiers
The special symbol on reel 5 will spin a wheel which will land on another of the Thundercats, which you can accept or choose to be your new theme and will also offer its individual enhancement

Wily Cat - random twin Wild multiplying reels
Cheetara - can randomly expand on reel 1 then it will stay in place and the remaining 16 positions become individual reels which spin and respin until no further Wilds are added. Aside from reel 1 though, the Wilds will actually change to a mystery symbol afterwards and then pay.
Tygra - any Wilds in view pay the win then transform to stacked mystery symbol
Panthro - reels can link with super stacked symbols and also expand randomly.
Lion-O - his sword on reel 3 may trigger random Wilds added to the grid.

Thundercat free games
Like most Blueprint slots you can gamble your award when triggering the games. Three or more red scatters will spin a wheel and you can get:

Ultimate Thunder Spins - the best and you can gamble up to this if it doesn't land. There are 5 spins always on the full 8-row reels and giant stacked Wilds on reels 1, 3 and 5.

Mumm-ra Spins - play 10 spins with any Wilds landing collected in a bank, all to be placed on the grid on the final 'Ever Living' spin which will have the 8 rows.

Slithe Spins - play 10 spins with Sticky Wilds. If you fill a whole reel there are 5 extra spins added.

Monkian Spins - 10 games in which Monkian Zones fall from above the reels and if landing in view turn Wild. If you get a Thundercats symbol on reel 5 on any game you get 5 extra spins.

Jackalman spins - 10 games in which any Wild landing increases the multiplier 1x, up to a maximum 10x. A Thundercat symbol on reel 5 awards 5 more spins.

Now as some of these 5 bonus rounds are more lucrative, you get the lowest one (Jackalman) taken off the wheel if you trigger with 4 scatters, and you get the highest potential feature (Ultimate Thunder) automatically for 5 scatters. If you gamble a lower feature and lose, you get a paltry coin award so be careful!

Our View...
Thundercats slot is typical of Blueprint, packed with random features and different bonus rounds although a cynic could say nearly all recent Blueprint slots have this format, which started with their King Kong Cash game. The theme isn't too bad for a cartoon-based game and the graphics and animations very good along with the 95.50% RTP. The base game is quite generous with the in-play random events pertaining to which of the Thundercats you have at the time although the feature is hard to trigger, but can pay hundreds times your bet! You can't argue with the format as it works, even if it is a little tired by now and seems to be Blueprint's er, blueprint!