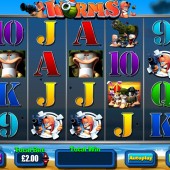 A 5 reel, 50 pay-line (fixed) game from Blueprint Gaming, Worms is an adrenaline-fueled video slot with some big betting potential, and bonuses galore for the lucky slots player.

If you owned a Playstation in the 1990s – back when remote controllers and Grand Theft Auto V were twinkles in their daddies’ eyes – chances are you owned a copy of Worms.

For the uninitiated, Worms saw you in command of a team of gun-packing wriggly fiends trying to blow the shit out of your opponent’s team of similarly loaded worms. The game was stupidly addictive fun, and now Blueprint have tried to recreate the mayhem in an online slot. Luckily, they seem to have succeeded.

On the reels are the regular 10-through-Ace symbols, plus an array of wacky-looking worms, familiar to anyone who enjoyed the original video game.Look out for the ‘Worms’ wild symbol, as getting five will trigger a 1,000 coin jackpot. They stack quite well on the reels, so you’ll find you’re getting plenty of Wild extra wins a lot during regular play.

If getting plenty of extra Wild wins sounds easy, triggering the game’s exciting bonus round is a completely different matter. There are plenty of bonus games on offer in Worms. First you’ll have to hit three Bonus Scatters on reels 2, 3 and 4 to trigger the Bonus rounds.

Pick Your Bonus with the Crate Escape Game

Once you’ve done this, pick a random crate to kick off one of three different games. The angry Tartan-wearing worm activates the Crate Escape Bonus game. Essentially a Pick Me Bonus game, you’ll have to choose from a selection of wooden crates: pick a weapon and your heroic worm will lose energy; pick a First Aid kit, and his energy is restored. Choose a cash icon, however, and you’ll bag a bonus cash prize. Keep on picking until your worm has gone to the big wormhole in the sky.

Next up is a Trail Bonus game, triggered by the Space Worm.  You can get up to 1,000x your total bet here, so it’s definitely one to aim for. Your aim is to get to the end of the planet trail by picking various icons. If you hit the ‘teleport’ icon, you’ll zoom to any position on the trail at random in front of you. If you select a weapon your heroic wriggly friend will start to be fired upon. If he gets hit by an incoming mortar attack your game is over and you’ll be catapulted back to the base game. Reach the end, however, and a potential jackpot is yours.

Games with great bonus rounds can never leave out a free spins round, of course, and Worms is no different. Hitting the Drill Sergeant Worm icon upon triggering the Bonus Rounds will see the spins bonus activated.

Spins are unlimited until your worm’s health goes down to zero. His health can be affected by various symbols hitting the reels during spins, such as the Pirate Worm who reduces your health bar, and the Medi-Worm, which restores it. Even better, there are plenty more Stacked Wilds during the free spins to make your bank balance look a little healthier.

If you were a fan of the original game – and even if you weren’t – there’s plenty here to enjoy. The bonus rounds may be tricky to hit, but the Stacked Wilds in the base game make up for that while you’re trying for those Bonus icons. Blueprint Gaming has released slots for other cult brands including the hilarious Viz slot and the iconic The Lone Ranger slot so check those out if you enjoy this slot.