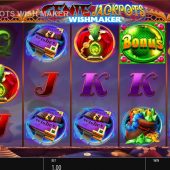 Genie Jackpots Wishmaker slot by Blueprint Gaming is simply a take of their original Genie Jackpots slot, later made into Genie Jackpots Megaways which to be fair was good. Here we get the mystic music, a background of the lounge holding the Genie Lamp and some nice animations to boot. The game you'll soon realise, adheres to the traditional Blueprint 20-liner script applied to tens of others like Ted slot or The Goonies, Austin Powers slot etc. So can the Genie grant us a fattened bankroll here or will that be wishful thinking?

We begin with 20 pay lines over 5 reels of 3 rows on Genie Jackpots Wishmaker slot and symbols can appear twice on a reel with exception of the top-paying Game Logo at 25x bet for 5-of-a-kind. This is the same as the Wild pays, then Fez or Swords 15x, Jewels or Spell Book 10x with four card values at either 5 or 2.5x for a full line. Scatters appear on all reels and it wouldn't be a Blueprint 20-liner if the Lamp by the right of the grid didn't fire out a Genie for some random modifiers!

You will get one of these 7 random modifiers:
Colossal Genie - yes, a big block symbol over 3 reels.
Genie Win Spin - what it says, usually a good big 5OAK win.
Infectious Monkey Wilds - a Wild appears and expands to a touching position, then may do it over an over until it stops, then win is paid.
Genie Wilds - yes, loads of random Wilds if you're lucky.
Mystery Wishes - lots of ? symbols which reveal the same tile.
Bonus Boost - adds lots more scatters to the reels.
Genie Streak - winning tiles remain in place while remaining ones spin, hopefully making the winning lines bigger and better, stops when no further useful symbol is added.

As usual on this mechanic there are six, which are on a wheel which spins when you land 3 or more scatters. You can gamble up the ladder but will get a rubbish mystery cash prize instead of your feature if you lose. From worst to best:
Sultans Jewels - choose chest to add cash awards until you stop, keys collected will upgrade the feature to next.
Magic Carpet - choose a lamp to move a Genie along a trail, will stop at mediocre cash total usually but can let you go to the end and the Big Money feature.
Lucky Wishes Cash Spin - get 3 cash spins, every cash value landing resets the spins to 3. You can retrigger or get up to 5x multiplier or have all the values increased should you fill the grid.
Golden Touch Free Spins - during each spin the Genie flies to a reel and makes it Wild, can land on it twice or more to add 1x multiplier to it.
Genie's Wild Storm Spins - extra Wilds on the reels, each one landing leaves a frame behind and on the final spin all framed positions become Wild.
Big Money - large cash prizes spin and you get the one landing. Pick scrolls to either spin again or collect. Max prize is 1000x.

This 20-line Blueprint mechanic is old, formulaic and flogged to death now. On Genie Jackpots Wishmaker slot you get great colourful symbols, animations and graphics along with the good soundtrack and a 96.06% RTP. This however, is no longer enough to keep people playing these games when they have the same old negatives. The lower features are rubbish and you nearly always get a trash cash prize when gambling them for better ones, an old bugbear of mine regarding this type of bonus trigger. The modifiers are essentially the same as you get on at least 10 other similar 20-liners and I'm fed up with them now. You can't win over about 4-500x unless extremely fortunate on the Big Money feature anyway. This slot is one I hope gets put back in the lamp along with the genie...