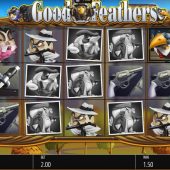 Good Feathers slot is what you get when Blueprint Gaming cross the mafiosi with poultry it seems. This birdbrained idea seems at first view to follow the format of numerous Blueprint games like Ted, King Kong Cash and The Goonies which I now suspect a new slot always will from this developer when they release a 20-line game. The reels lie over a city background of what could well be Chicago and like Novomatic's Chicago slot itself we have many of the symbols in monochrome too. The music is that which you'd expect in any decent old Hollywood crime movie, but will these gun-toting birds make you an offer your bankroll can't refuse?

We have 20 paying lines on the Good Feathers slot with icons single although 2 can appear on any given reel. The Wild or Yellow Beak both pay the best 5-of-a-kind at 25x bet, Gangster with gun 10x, Crow or Pink Waistcoat 5x, both Monochrome Birds 2x and the Gun or Knife 1x. I was a little unfair at the beginning here because this 20-liner actually has a new mechanic, a cascade symbol replacement for when you get any winning tiles and indeed this is how we can trigger our bonuses. You would expect some random modifiers on any Blueprint slot so you won't be disappointed here.

After any spin you may see the Bird Boss rise up from under the grid and offer you three eggs to break. When you choose one you'll reveal one of these:-
Egg Bomb - A bomb is thrown onto the reels which causes a reset of the symbols, guaranteed to bring in a win.
Fly By Wilds - A Mob bird flies past the reels and shoots certain birds turning them into wilds.
Stork Wilds - A Stork Stacked Wild symbol is dropped onto the reels. If it creates a win, it will work as any other cascading symbol.

If you have 4 or more consecutive winning actions on any spin, you'll fill the FBI Star Badges on the left of the reels up. You'll be awarded a feature from the following. These are ranked lowest to highest in worth and you have the chance to gamble on a pie chart for the next one, which gets more of a losing segment as you progress towards the best. You get no feature and a smallish cash award if you lose!

Prison Escape Bonus - pick from cell doors to release the Goodfeather prisoners and earn cash. A poster raises you to the next level, a siren ends the round.

Warehouse Bonus - have up to 5 picks from a selection of suitcases. You see a cash offer each time, you can collect it or risk opening another for more, or less. The fifth pick must be collected.

ScarBird Free Spins - you get 5 Free Spins with a ScarBird Wild symbol active. When this appears it will shoot at other tiles to create extra Wilds. After these spins choose from 3 suitcases for either collect or retrigger.

Infeathergation Free Spins - you get 8 spins with stacked Infeathergation Wilds on the reels. When finished, pick from 2 cards to get Bad Cop and collect, or Good Cop and a retrigger.

Crime Scene Free Spins - 10 Free Spins where every winning action increases the multiplier by 1x. the higher this goes, the more evidence is uncovered which raises your level to a maximum of 4 where the highest multiplier can reach 20x. If you land an FBI badge 3 extra spins are awarded.

Good Feathers slot has a different trigger mechanic to other Blueprint 20-line games but really is just the same as the ones mentioned in the introduction. The features aren't great although triggered often enough and the game just came across as completely inane after a short time although some may Like its quirkiness. You can't fault the way the theme has been applied graphics-wise nor the 96.35% RTP and good animations either, but the top feature is very often disappointing despite the obvious potential. Good Feathers is one protection racket I'll keep well clear of in future...