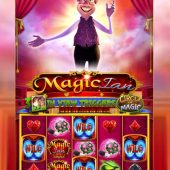 Magic Ian slot, well lets just hope the game is a bit more imaginative than the stunning piece of wordplay in the title which of course tells us that 'Ian' is a Magician. He's not alone as WMS have the Magic Wand slot or you may have seen Microgaming's decent (though poorly animated) Magic Boxes but being a Blueprint it's a pretty safe guess right now that our friend Ian will offer far more features than those! The appearance is odd as like Thundercats slot Blueprint have added the chance of Colossal reels so we see a small reel set with a stage curtain above from which the inane-looking Ian grins out at us and silly circus music drills our ears as we play. Is there any chance 'Ian' can wave his wand over our cash?

On the reels...
The microscopic reel set underneath Ian has 5 reels of 3 rows each over which you get 20 pay lines and pay 25 coins per play. All icons bar the scatters are stacked and for any 5-of-a-kind wins we get 16x bet for Wilds or the game Logo, the Hat or Chest 8x, Cards or Flowers 4x with the card suits paying either 3 or 2x for the full line. Now our Ian will not stand above the reels idly of course, so typically of this developer we get plenty of random in-play events!

When Ian moves he will black out the reels and stage and you'll just see his eyes and when the light returns he may (or may not have!) granted you one of 10 magic events:

Expanding Reels - the reels grow up to 8 rows high and up to 50 win lines.
Levitation Spins - Floating symbols appear and some settle on the reels.
Teleport Spins - A second set of reels appears above the first
Mirrored Reels - he conjoins 2-5 reels, whatever the reel height.
Chest of Wonder - A Magic chest appears under any reel and may turn it Wild.
Symbol of Surprise - Ian reveals a mystery symbol which will replicate the whole reel to itself wherever it appears.
Magical Streak - a lock and chain will appear triggering a respin streak.
Shuffling Symbols - when no win has landed, symbols will shuffle to make one.
Bonus Boost - Ian adds many more Bonus Symbols to the reels.
Super Bonus Spin - If 2 bonus symbols land on the reels the others may grow in rows then respin for another chance to get the third.

Circle of Magic bonus
If you see 3 Ian bonus icons on the centre 3 reels then you will be taken to a Wheel. You get 3 picks of the 4 cards underneath as you only have bet multipliers and 2 free games segments out of 12 positions, and you may add more feature segment(s) or increase the cash prizes or simply get 'spin' immediately. If you get cash you can gamble this for the feature afterwards on a 50-50 feature/smaller cash prize Wheel. If you get the feature you can also gamble it for a better one. The four features can't be retriggered and are:

Magic Rope Spins - if you see a rope on any reel it will expand afterwards to 8-rows high for the rest of the free spins.

Teleport Spins - you get 2 reel sets and any Wilds appearing on either will Teleport to the other set.

Levitation Spins - Wilds will rise up over the reels and some will settle on the grid when the reels stop.

Metamorph Spins - reels 2, 3 and 4 have Sticky Wilds and each time one lands you get an extra spin plus the reel grows by one row.

Our View...
Magic Ian slot is rather juvenile but the first real problem to point out is the ridiculous and annoying facet of any game which lets you wait ages for a feature trigger only to fob you off with a pathetic cash prize and no guaranteed bonus. This is a big black mark unfortunately. The RTP is average at 95.89% as are the graphics and animations but the sounds and music are exceedingly tiresome, and quickly too. We've seen this game mechanic too many times now from Blueprint and although it works we need some fresh ideas, lest they become another Microgaming (A developer seemingly short on fresh ideas). I definitely won't be in the audience for Ian's next performance...