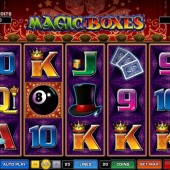 Just like Vegas-themed online slots, which evoke images of entertainment, excitement and lots of lovely moolah, magic-themed slots are full of mystery, glitz and glamor. Or, at least, they should be.

The game is a 5 reel, 25 pay-line slot with coins ranging from $0.01 to $0.20 a coin. In terms of symbols, we get a Top Hat (here the top payer), a spinning top, a wooden train, and some playing cards, plus some standard Microgaming 9-through-Ace icons.

The Magic Box icons, which shudder about on the reels in animated style, are the Wild, and only appear on reels 2, 3 and 4. They substitute for all regular symbols in the game other than the Scatter.

Land three or more Scattered Eight Balls on the reels anywhere and you will trigger a free games feature where anything from 8, 16 or 24 spins can be won. The more Scatters you hit, the more spins you win, so landing five Scatters bags the maximum 24 spins. The Magic Box Wilds also take part - again appearing on reels 2, 3 and 4 only - but depending on which box you land to form a winning combo, the higher your multiplier.

So, hitting a Red Wild Box doubles any win, a Green Wild Box multiplies winnings by 3, and a Blue Wild Box has a 4x multiplier attached. If you land more than one Wild during the free spins, the lower Magic Boxes change to become the same color as the highest multiplying Wild.

With its really generous bonus round, Magic Boxes is a wonder on five reels. The Magic Boxes aside, some of the animation is a little dodgy - just witness the 8-balls when you land a couple on the reels - but the colors look good and the reels and gameplay are seamless.