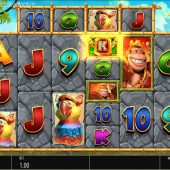 Return of Kong Megaways slot by Blueprint Gaming brings us back their famous Gorilla from King Kong Cash although he seems to have lost his habit of scratching himself. Jungle drum beats and gorilla roars assail our ears as we open the game which is set over a cartoon jungle and features more cartoon animals on the stone reels. Blueprint have tried, with varying levels of success, to make their Megaways games different from the standard with Diamond Mine and especially Genie Jackpots Megaways and I can assure you there's a couple of new things here, although hardly radical. So will Return of Kong mean a return to profit for our bankroll or like those drums, will it take a beating?

We get the standard Bonanza reels on Return of Kong Megaways slot which means 6 reels of up to 7 rows each, therefore 324 up to 117,649 ways to win. Wilds can only appear in the form of a Leaf singly on the scrolling line of 4 symbols which lies over the middle reels and you get letter scatters which will spell out K-O-N-G if you get 4 or more anywhere on the grid. Winning symbols disappear to be replaced by more from above with 50x bet being the best 6-of-a-kind pay for Kong, 5x Rhino, 2.5x Tiger, 2x Parrot and six card values pay from 1.5 down to 1x for a full way of 6. There is one random feature whereby Kong throws up to 100 Gold Barrels onto the spinning reels which reveal a mystery symbol wherever they land, which can be anything except scatter or Wild. As with all Megaways slot, this game is all about the bonus.

If you get 4 KONG scatters 12 free spins are yours, with 5 more for each scatter over the four. As with Bonanza, every winning action increases the multiplier by 1x during them, but there is an extra feature in play here. You don't get 5 or 10 extra spins for 3 or 4 Golden Monkey scatters on the scrolling reel here, but every time you collect 3 you fill a meter and get 2 extra spins and also a guaranteed minimum amount of ways for subsequent spins. These go 1000, 2000x, 5000 etc. in sequence. You also have the mystery Golden Barrels added to the reels for the entire free games round.

You get 3 possibilities here:
20x bet - you spin a wheel and get from 1 to 10 spins on the inner wheel and a minimum amount of ways of 1000 to all 117,649 on the outer and any combination possible in between.
100x bet - the standard feature trigger as described above.
150x bet - you get a wheel feature again, this time with 5 to 15 spins and a starting amount of way levels and you can get any combination shown.

These features were also added to LeoVegas Megaways.

The standard feature on Return of Kong Megaways slot is probably better in my opinion than the usual one so that is an improvement. The feature buys though of 20x and 150x are hardly responsible and you'll be fortunate to get the cost back on them, so I would advise avoiding them. The RTP if the game is played normally is 96.03% but using the buys it can range from 96.50 to 97.00%. The slot looks childish and is slightly irritating to listen to and when push comes to shove it's just another samey kind of choice for slotters. It may be a Return To Kong for Blueprint, but I can't think of a reason to return to it myself...