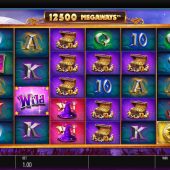 The Pig Wizard Megaways slot by Blueprint Gaming stretches this developer's Megaways slot catalogue to almost the combined amount released by all other developers put together. That inevitably means lots of clones and near-copies in amongst all the good ones, so what do we get here? It's themed on an old Blueprint game of the same name, just like their Genie Jackpots Megaways is and most definitely Deal or no Deal Megaways. We get cartoon music with a touch of magic, a moonlit castle background and rather juvenile symbols on the reels. So will our bankroll receive a magic spell here or end up being turned in to bacon?

You get no scrolling reel of 4 symbols on The Pig Wizard Megaways slot and the reel rows are 2 to 5 therefore 64-15625 ways per spin. The volatility here seems to be lower than most Megaways games with 10x for the highest 6-of-a-kind win, the Gold Pig, 4x Hat, 2x Chest or Book with six card values paying either 1x or 0.5 for a full way. Wilds can appear singly on reels 2 to 6 and Wizard scatters on all reels and aside from those scatters or Wilds symbols can appear stacked too, but here there's no replacement cascades for winning symbols. You do get a few in-play features though and we randomly see Purple Orbs appear on the grid which are the trademark Blueprint Mystery Symbols, revealing the same icon.

You will see this by the left of the reels and the symbol changes every spin and you can get a modifier called Spinnus Repeatum - if you get a win consisting of the displayed symbol, the reels will freeze the win and re-spin the remaining positions until no more are added to the grid.

The Pig Wizard may appear at the bottom right of the grid and wave his magic wand to award one of these two:
Magical Win Spin - will add Wild or Mystery Symbols to create a guaranteed win.
Winnus Revealo - upgrades your losing spin into a winning one.

You need 3,4,5 or 6 Bonus scatters for 10,12,15 or 20 free games respectively. During these spins, two or more scatters will award a quantity of extra spins. All spins will have a random multiplier of 2 to 50x applied and the Mystery Mirror is active on every spin too, so any matching win will get you some re-spins. You still get the Pig Wizard modifiers as well.

The Pig Wizard Megaways slot isn't the best visually or graphics wise and the sounds are a tad annoying but nevertheless it's not a bad game with a decent mechanic and RTP of 95.75%. The re-spins occur quite regularly and can pay some decent hits as can the two Wizard modifiers. The free games do have some potential although you'll not be likely to get those insane 5,000x or more results some of the more volatile Megaways slots like Diamond Mine slot can award. It may well pay to go to the market with this little piggy...