This is Spinal Tap slot

Free This is Spinal Tap slot

This is Spinal Tap slot review 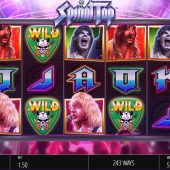 Well what can I say? One of my favourite films, the spoof 'rockumentary' This Is Spinal Tap has made it on to a slot, delivered by Blueprint Gaming. The 1984 American film is about a British Heavy Metal band (rumoured to have been based on the group Saxon) going on tour and everything going wrong. The game features the four band members and as expected the soundtrack is a guitar riff from the movie itself. You may have seen WMS's Kiss slot, Netent's Guns'n Roses or Leander's Megadeth and This Is Spinal Tap certainly adds some more screaming guitar chords to the rock slots collection. So will you earn some decent royalties here, or will your bankroll die quicker than a Spinal Tap drummer?

The game begins as a 243-way slot for which you pay 30 coins a spin and symbols are stacked bar the Plectrum Wild which appears on all reels. As is typical of Blueprint's games the game logo is the top paying symbol at 200 coins for a 5-of-a-kind with the band members paying 150 or 90 coins and the card values 60 or 30. There are pays for 6 or 7OAK too, but that's applicable to either a random 'Rock Mode' trigger or you paying 50x bet to buy the feature, which adds 2 more reels to make the game 2187-ways with one of several Wild enhancements possible. The random trigger occurs when the start button (in the form of a volume control) turns itself up to the magic 11, alluding to the classic scene where the guitarist being interviewed proudly boasts of his amplifiers "These go to 11!".

Needless to say that being a Blueprint slot the game is incredibly complicated with numerous feature permutations in a similar vein to the Ted slot and King Kong Cash!

If your volume hits 11 on any spin you'll simply get one of four enhancements which we've all seen before on numerous Blueprint slots and your grid expands to 7 reels:

Heavy Duty Wilds - A number of reels will be transformed into Wild Reels. These may ignite to add a multiplier, up to 5x.
Wild Sparks - A number of positions will be converted into Wild Symbols.
Rock 'n' Roll Spins - All winning symbols are held in position, the reels will respin until no further icons are added.
Bonus Odyssey: Extra bonus symbols are added to each reel.

If not triggered randomly you can buy a VIP Guest Pass for 50x bet to be given one of the above four enhancements awarded via a bonus wheel, with one chance to press 'take it' or 'f*ck it!' which will spin again and swap it. ALWAYS press 'f*ck it!' as the second chocie is always better.

Land 3 or more scatters anywhere in view to commence a feature pick. The resulting feature can be gambled on a gold disc pick unless you get the top one, the last in this list of 7:

Double Platinum Bonus - a cash wheel where arrows will take you in a level to bigger prizes and all the four free games rounds could be won - rarely!

Stairway to Hell Free Spins - 11 Free Spins. During these Free Spins a special Bone Guitar Wild will be added and the reels may randomly extend to 2187 ways one any spin and a skull may multiply wins 2-11x, plus an extra spins symbol can appear.

Encore free Spins - 11 Free Spins in which any Wilds collected are added to a bank and thrown onto the grid for the last free spin.

Stonehenge Free Spins - 11 spins on the 7-reels grid with a Stonehenge behind the middle 5 reels over which any Wild landing becomes sticky. Fill it up and you will start a fresh set of 11 spins with Stonehenge Wild block in place.

The World Tour Bonus - A trail featuring Europe, USA and Japan. Spin a wheel to advance and if you reach the end of the Japanese final section a 2 - 10x multiplier is awarded to accumulated totals, can award up to 10,000x bet.

The best thing about This Is Spinal Tap slot is the RTP, 96.92%. There's plenty of music, noise and colour going on with some great graphics and effects but this doesn't substitute for the stale and formulaic old Blueprint game mechanic. Firstly, using the 50x bet VIP Pass raises your RTP to 97.02% but is absolutely dreadful, I tried this nearly 20 times and only once exceeded the 50x bet cost. Just don't do it! Secondly, with the poor line pays and low returns in anything but the two highest of the seven bonus games you will be sorely tempted to take the feature gamble offered and nearly aways lose it for a mediocre coin award. I loved the theme but like Spinal Tap I am going to make this my final tour...