Wish Upon a Jackpot Megaways slot 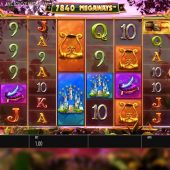 Wish Upon a Jackpot Megaways slot by Blueprint Gaming is like their Genie Jackpots Megaways slot in that they have converted one of their existing games to this licensed mechanic. Blueprint have made more Megaways games than any other developer and some are better than other with Deal or no Deal Megaways being rather poor but for example Primal Megaways proving very popular with players at online casinos. We get a colourful fantasy theme here with a pink forest behind the reels and fairytale music as we spin as well as cartoon sound effects. There aren't actually any jackpots around despite the name, so how can we boost our bankroll in this magical world?

We don't get a scrolling row on Wish Upon a Jackpot Megaways slot so that means the 6 reels can give 32-117649 ways per spin with winning symbols replaced on their columns from above. Wilds can only appear via the modifiers which we will see later and scatters in the form of a Fairytale Book can appear anywhere. Symbols can appear stacked and singly with the Logo Star paying 25x bet for 6-of-a-kind, Castle 5x, Shoe or Lyre 2x with six card values awarding either 1 or 0.5x.

When she appears, you get 3 Orbs to choose from which will reveal either:
Magic Beanstalk Wilds - these can be 1-4 Wild reels over the centre 4 columns and the multiplier is equal to the rows on the respective column.
Pigs Can Fly Wilds - random Wilds scattered over the centre 4 reels.
Golden Arrow Mystery Spin - 100 Jack characters added to the reels as mystery symbols and these may or may not land to create a win.

If you see 3 scatters you get 10 free games and one Fairy Godmother modifier from above is picked randomly to feature heavily during them. You get an increasing multiplier for each winning action and 1 extra spin for each scatter you see as the bonus plays out. Some big potential if you build up the multiplier and get the modifier active in the later spins.

Wish Upon a Jackpot Megaways slot is colourful and somehow doesn't feel as childish as the name and appearance suggests. You have a 95.99% RTP and the random modifiers are quite frequent with occasional big pays so the base game is fine. Perhaps as a result, the free games can be hard to trigger and when you do you'll notice far more incidences of the chosen modifier in the earlier spins than the later ones. Despite this, the free games are entertaining and can be profitable but beware they are volatile! I can't say this is the best Megaways ever but the Fairy Godmother could smile upon you...