Wish Upon a Jackpot slot

Wish Upon a Jackpot slot review 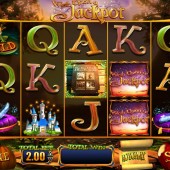 It’s a fair bet that there are slots fans out there who love slots with good graphics, those who prefer lots of juicy bonus games, and those who enjoy a touch of magic with a fairytale-themed game.

As luck would have it, slot developer Blueprint Gaming have come along and wrapped them all up in one neat package.

Ingeniously substituting the word ‘Star’ for ‘Jackpot’, Wish Upon a Jackpot is a straight homage to the world of fairytales and Disney. In fact there are suspiciously Disney-esque images throughout this game, from the Gingerbread Man and Puss in Boots from Shrek to the enchanted castle from Sleeping Beauty.

Whatever the inspiration, players of Sheriff Gaming’s super 3D slot, Magical Forest, or NetEnt’s cheeky fantasy-themed game, Trolls, will absolutely love this game – but bring your wallet, there’s gambling to be had.

A 5 reel, 20 pay-line slot, the lines – as seems to be the case with many Blueprint games – are fixed, meaning the betting stretches from $0.20 to $500 a spin. Lucky the bonus rounds pay you back as much as you will pay into the game.

On the reels are plenty of icons from classic fairytales: Puss in Boots, Cinderella’s glass slipper, the giant’s golden harp, a castle, and the regular 10-through-ace card symbols.

Keep an Eye Out for the Frog Prince Wild

The frog prince is Wild, and substitutes for all symbols other than the Scatters. Also look out for the Wish Upon a Jackpot logo symbol, as it acts as a Stacked symbol on all reels for bigger wins.

Stacked Wilds, Schmacked Wilds – what you want is bonuses, and Wish Upon a Jackpot has ‘em in spades; five games to be exact.

First you’ll have to hit three or more game logo symbols on the reels anywhere. You’ll then get to pick from three fairytales to decide what bonus game you’ll play.

Rumpelstiltskin’s Deal Maker is first up, essentially a Gamble feature within a bonus game. Rumpie appears with a contract with a multiplier attached. You can choose to accept it or gamble and pick another scroll to see if your win is higher or lower than what he’s offering. Deal or No Deal, anyone?

Follow in the footsteps of Jack as he travels along the magic trail in the second bonus. Choose a magic bean to make the beanstalk grow, and keep choosing beans until you hit ‘Collect’. Make it to the top of the beanstalk, however, and the Golden Goose prize could bag you a potential 1000x line bet jackpot.

Free spins haven’t been neglected, of course, and luckily there are not one, but two free spins features in the game.

Rapunzel’s free spins sees you with unlimited spins and a heroic prince shimmying up a tree filled with multipliers. Make it to the top of the tree and get the girl and your spins will stop. The multipliers here are key as they go from 2-5x, so you can really make this round count.

The other free spins round sees the big bad wolf huffing and puffing away at the three little pigs’ door. If a pig appears on the reels during the spins the symbol will turn Wild. If the wolf appears he will blow the Wild away. The spins can be re-triggered.

Finally, as if that wasn’t enough, the Fairy Godmother Spin will trigger randomly during any spin. If the fairy godmother hovers over the screen, she’ll give you the chance to pick another bonus feature. Choose from between Pinocchio Wilds (turns any reel spot Wild); Gingerbread Man Wild Reels (randomly turns an entire reel Wild); Puss in Wilds (causes adjacent symbols to turn Wild); Bonus trigger (sends you straight to the bonus games screen); and Fairy Win Spin (gives you a guaranteed big winning spin).

Overall, Wish Upon a Jackpot is one of the prettiest, most generous slots I’ve played recently. It doesn’t exactly cater for the penny bettors, but stick with it and big wins can be yours.