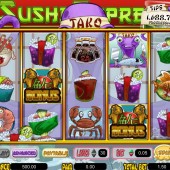 Who doesn't love a bit of sushi on a day out shopping or a night out with friends? That's the theme of Cryptologic's online slot, Sushi Express.

With some fantastic cartoony graphics and lovely touches (particularly the ambidextrous octopus chef, Tako) this is one for fans of both food and online slots.

Played over 5 reels and 30 paylines, Sushi Chef has a nice animated chef hovering behind the reels while a conveyor belt of sushi dishes sails past. It is something that you might expect to see in some bizarre Manga cartoon production!

On the reels we get a puffer fish, soy sauce, a crab, shellfish, noodles and wasabi, as well as assorted sushi dishes which pay a maximum 75 coins.
Tako the Octopus is the Wild and substitutes for all regular symbols other than the Scatters. Five Wilds pays a nice 1,000-coin jackpot.

Pick Your Sushi to Win Big

Three Scattered restaurant signs on Reels 2, 3 and 4, meanwhile, will trigger the Sushi Bonus.

First, pick items of Sushi from the conveyor belt. Keep picking until you hit the Collect symbol. With these you will determine the number of free spins you get in the coming round.

Then you get to run your free spins. During the bonus feature all symbols will fade except the Sushi and Soy Sauce symbols.

Pick one and you can pick up bonus cash or +1 on your spins. On your last spin you will get to choose again and this time you could bag the game's Tip Jar progressive jackpot.

Sushi Express is a lovely game to look at. Watch out especially when the Octopus Wild forms a winning combo. He will launch into action and chop food up. In fact, the Wild wins seem to crop up a lot more frequently than the bonus feature does.

Slots developers obviously get a kick out of Oriental foodfests on the reels, and if you like this check out Betsoft Gaming's typically lush 3D food-themed Sushi Bar, while Cryptologic's martial arts-themed Little Master slot is superb if you're into a touch of the Oriental.