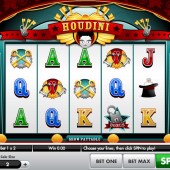 Before I started writing this review for this Houdini slot by the renowned developer Gamesys I had this perception of Harry Houdini as this mystical magician from back in the day who was a pioneer for illusionists. However, after seeing the weird S&M image of Houdini in locks and chains I have my doubts.

Moving on, this Houdini slot is a 5-reel, 25-payline slot based on the world-famous illusionist of the same name. The reels are rammed with all sorts of symbols associated with the magician himself including the assistant monkey Bess, a magician’s hat, a set of keys for a lock, handcuffs and the regular Jack-through-Ace symbols.

The Wild symbol is represented by the freaky pale face of Houdini and this symbol substitutes for all other symbols, except for the Scatters, to complete winning combinations across the reels.

Unlock the Chests to Win Big

There are three Scatters on this slot with all three acting as triggers for the slot’s three bonus features.

First up, there’s the locked chest Scatter. If you hit three or more of these across the reels then you will trigger the creatively named Scatter Bonus.

In this bonus, you must attempt to unlock Houdini and his friends from their locked chests in order to win prizes.

Pop the Balloons (Not the Monkey!) to Earn Cash

The next Scatter is the balloon bonus Scatter. If you hit three or more of these across the reels then you will trigger the inventively named Balloon Bonus!

Knife-throwing is the subject of this bonus. You will need to throw the knives and pop as many balloons on the board as possible to win prizes. Just don’t pop the monkey, whatever you do!

Finally, the Escape Bonus Scatter triggers the Houdini Escape Bonus if you hit three or more of them across the reels.

Granted, it's a slightly better named bonus than the previous two… but only just! In this bonus, you must ultimately help Houdini escape by finding the keys to unlock our hero in chains. You can win cash prizes along the way as well.

Houdini is quite a decent slot. It could do with a free spins bonus round but the presence of three bonus features ensures that there is plenty to keep you busy and there is a lot of potential for big cash wins.

If you enjoy this slot and are looking for more magic-themed slots then you might want to check out Ainsworth’s entertaining Sheer Magic slot.