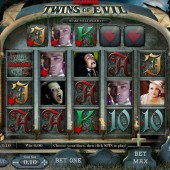 Warning: Do not play this online slot late at night or alone in a haunted house. If the horror chills of Gamesys's Twins of Evil don't get you, the 1970s retro vibe and schlocky special FX might.

Welcome to the Horror!

Twins of Evil is based on the classic from the British film company Hammer Films, who churned out dozens of chillers from the 1940s until the 1980s.

Hammer are back making horror films once again. But with films like The Curse of Frankenstein and Dracula, the studio will be best known for their '50s/'60s golden age.

The 5-reel, 20-payline Twins of Evil slot features the deadly vampire teen twin girls on the reels, plus various characters from the 1971 film that starred Brit horror great, Peter Cushing.

The 10-through-Ace symbols are suitably Gothic, while there's also a Hammer Films Wild which substitutes for all regular symbols other than the Scatters.

There's a lovely ambiance overall - especially the werewolf howls and lightning that plays out between spins - and everything seems to have been cast in Gothic stone for added effect.

Pick a Twin to Reveal a Win

Hit three Peter Cushing symbols on Reels 1, 3 and 5, and you will activate the Twins of Evil Bonus game.

Essentially it's a straightforward Pick 'em Bonus; make a choice and if you reveal the beautiful twin you win cash. Hit the evil twin and your turn ends.

Twins of Evil is a really nicely-done slot. Lots of attention has gone into the horror ambiance, and a neat sequence from the film plays out when you hit a winning combo.

Check out the meter above the reels; if you hit a sequence of identical symbols featuring the Stake/Heart combo you can win bigger multipliers.

Immediately, Twins of Evil brings Barcrest's horror-themed The Curse of Frankenstein slot to mind, especially with its authentic images from the original film and ghoulish atmosphere.

And for the full bonus effect, together with a neat 'werewolf slash' feature, check out one of my favourites, Ash Gaming's werewolf-themed Full Moon Fortunes.