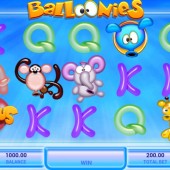 Now and again, slots developers add titles to their portfolio that feel as though they are aimed slightly too much towards children. Don't get me wrong, we all love a bit of nostalgia now and again but I only need to refer to Leander Games and their Glutters slot to give you an example of how slots can appear a little inappropriate.

On the Reels...
Las Vegas-based developer IGT has fallen victim to this controversy with its Balloonies slot. Balloonies is a 5 reel, 20 payline slot that feels like it has been inspired by a television programme that you'd likely find on Nickelodeon or The Cartoon Network that is aimed at the 1-5 age group.

The Symbols
Symbols across the reels are based on the various Balloonies characters. There is the blue dog, brown monkey, pink elephant, yellow giraffe, and the regular symbols of a Q, K, and A icons to keep things ticking over.

Win Big with the Puffer Fish Wild
The Wild symbol is represented by some weird looking puffer fish with the “Wild” sign stamped on its body. This symbol appears on reels 2, 3, and 4 substituting for all other symbols, except for the Bonus and Scatter symbols, to complete winning combinations.

Earn up to 12 Free Spins with the Bonus
The Bonus symbols, in the form of a red balloon with the word “Bonus” written on it, are vital if you want to get involved in some free spins bonus round action. If you manage to hit three of these Bonus symbols on reels 1, 2, and 3 at the same time then you will trigger the free spins. Once triggered, you will get to choose from a red, blue, and green balloon with the Pop Me Picker to decide how many free spins you are rewarded. There are up to 12 free spins to be awarded and a multiplier value up to 40x can be achieved. It should be noted that the Bonus symbol does not appear in the free spins bonus round.

Hit 5x Multipliers with the Star Scatters
The Scatter symbols come in the shape of the star icons. These appear only on reels 1, 2, and 3 and have at least a 2x multiplier attached to them when included in any line wins. They also form the Star Multiplier feature where each star Scatter that appears they award up to a 5x multiplier depending on how many are hit across the reels on a single spin.

Our View...
Balloonies has a lot more depth than I initially anticipated. The design is quite child-like which is a bit disconcerting but the game play ensures that this game is clearly aimed at adults. The Floating Reels might just be a variation of Tumbling Reels (reverse Tumbling Reels if you will) but it is still a welcome inclusion. The free spins bring potential huge payouts with large multipliers and the Star Multiplier feature only adds to the thrills and spills. Surprised this did not have more fanfare attached to it and IGT launched it at the same time as the more publicised Prowling Panther slot. This game has a lot to give.