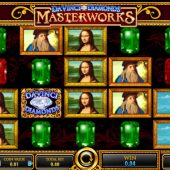 Da Vinci Diamonds Masterworks is a long-awaited sequel to IGT's classic 20-line 'Tumbling Reels' Da Vinci Diamonds slot with it's free spin scatter-pays and fine art. There are some major changes here with the Masterworks version as we'll see and far more big win potential! We retain the original classical music as we play and the artworks on the reels, although aside from the Mona Lisa these have changed too although we retain the green, yellow and red gemstones. The prices of classic artworks always seem to rise each time they come to the market - can our bankroll do the same?

You will notice immediately Da Vinci Diamonds Masterworks has an extra row as we have 30 paying lines now over 5 reels of 4 rows each for which we pay 40-coins per spin. The paintings can now appear stacked as they cascade in but the line pays are now far lower. The Da Vinci Diamonds game icon is still the highest 5-of-a-kind win at 25x stake or 1000 coins. Mona Lisa pays 100, The Bearded Man 75 and the Lady In Red 50 with gems paying 30 for the reds and 20 for greens or yellows. Single Wilds appear on all reels and these along with the bonus scatters on reels 1, 2 and 3 are exactly the same as before. So how can the pays be lower and yet there is far more potential for big wins?

On any spin the 3 painting icons can appear as giant 2x2 block symbols and should one of these appear in a winning combination you will see a 2, 3 or 4x multiplier for the symbol in question. These can appear on any adjacent reels i.e. 1 & 2 and 2 & 3 etc. and if you see more than one form a line then the multipliers are multiplied thus it's possible to have anything from 2x2x2 to 4x4x4 applied to winning combinations they form! You may also see a cascade drop in 4 single symbols adjacent to each other in a 2x2 block and if this occurs they become a Giant multiplying portrait too. There is a random bonus too - on a losing spin a Giant Portrait may transform to a different one in order to create a winning result.

This simply means a choice of different free games bonuses. As with the original Da Vinci Diamonds if 3 bonus tiles drop in on reels 1, 2, and 3 you trigger the bonus, only this time they don't need to be on a pay line. As before you get 6 free games initially but can choose an enhancement:

Portrait Scatters - this is the same as the original slot in that all of the three picture icons pay scattered. Giant 2x2 Portraits count as either 2 or 4 icons depending on whether they are fully in view or not. The Giant Portraits also pay a 2, 3 or 4x multiplier as in the base game.

Boosted Multipliers Bonus - Your 6 free games don't have scatter pays and are the same as in the base game except your GiANt Portrait 2x2 symbols now have either a 4,5 or 6x multiplier appled.

Gigantic 2x2 Wilds Bonus - your 6 free games can now present you with a 2x2 block Wild which has also a 2x multiplier, and the other Giant Portraits have the same multipliers as in the base game.

In all cases 3 more Bonus scatters add 3 extra spins and there may also be a random retrigger of 6 spins when the bonus ends, although this can only occur once.

Da Vinci Diamonds Masterworks slot is a creditable sequel to Da Vinci Diamonds which is so often not the case with second editions - think Netent's awful Twin Spin Deluxe they added to the original Twin Spin! It is actually possible to get 4 Giant Portrait symbols in one 5-of-a-kind win and should this occur in the Boosted Multiplier free games you could see your 2.5x bet for Mona Lisa multiplied up to 1296x per line and IGT assure me it does happen - rarely. The RTP is 92.55-96.37% depending on the operator setting and IGT have managed to make the game more exciting yet have kept the feel of the first edition which will be a comfort to new players. I may not be into visiting art galleries but I will certainly make an exception for these paintings...