Dr Frantic and the Lab of Loot slot

Dr Frantic and the Lab of Loot slot review 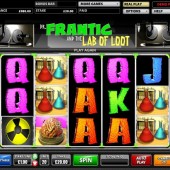 If there were awards handed out for best slot title then this new release from renowned slot developer IGT would definitely be in contention along with the likes of Betsoft Gaming’s Miles Bellhouse and His Curious Machine of course!

This 5 reel, 20 payline slot takes you into the laboratory of the clearly mentally unhinged Dr Frantic where you will encounter a variety of scientific symbols on the reels including a radioactive sign, test tubes, experimental brains, an electricity power lever, Dr Frantic himself and the regular 9 through to Ace symbols that are displayed in a colorful font. Personally, I love the feel of the reels with the comic book style.

You'll Be Glad to See This Radiation Warning!

The radiation sign acts as the Wild symbol so don’t panic. There shouldn’t be a nuclear meltdown when you hit this symbol but it will substitute for all other symbols, except for the electricity power lever Scatters, to complete winning combinations across the reels.

The electricity power lever Scatters play a key role in helping you get some big wins on this slot. If you hit six or more of the Scatters across the reels during a spin then you will trigger the Lab of Loot Bonus. This is where you will need to pick from a selection of electricity power levers to pull and reveal a mystery prize that appears in one of the television screens.

Power Up the Gauge to Progress

This is a great opportunity to trigger extra bonuses. If the mystery prize is revealed to be a monster’s head then you will trigger the Power Up Bonus. In this feature, you will be shown a power gauge. The power is activated a number of times and in order to progress to the Money Monster Bonus you must land on a sector of the gauge that displays a monster’s head.

The Monster Comes Alive to Reward You with Prizes

If you successfully manage to progress to the Money Monster Bonus then there are some big prizes to be won. You will be taken to a second screen where the monster is lying tied down on a table. The electricity strikes the monster and the monster will come alive and reveal a prize.

Now, hitting six or more of the same symbols across the reels might appear a hard job to complete at first glance but this is where we introduce you to the Chain Reaction Bonus feature. This feature is where every time you hit a winning combination and all of those symbols that make up the winning combinations will lock in place and the reels spin again. The reels will keep spinning until the total win does not increase on the previous spin.

Dr Frantic and the Lab of Loot is one of those slots that has a light-hearted approach to online gaming and for that fact alone I did thoroughly enjoy playing it. The Chain Reaction feature kind of acts like a free spins bonus round in everything but name and the additional bonus features ensure you have lots to keep an eye out for during your time playing this slot. It isn’t the finest IGT slot to be released and I would recommend something like the magical Dungeons and Dragons – Treasures of Icewind Dale slot over this release any day of the week but it is far from the worst slot IGT have released so could be worth a trial play.