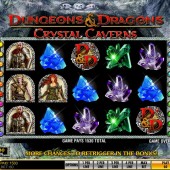 "I'm going to attack the ogre with my broadsword, but I have +3 on my Attack because my Strength is 18. Oh, hang on, I have Dexterity 15 so that's another hit point."

Not Just for the Fantasy Roleplayers

If that sounds like absolute gobbledygook you probably weren't, unlike me, spending too many nights as a teenager hunched round the kitchen table hunting out buried treasure, arguing over magic spell ranges, and comparing paint jobs on your lead miniatures. For some of you, though, that will bring back a lot of memories. However, don't rule it out if you were never the biggest fantasy roleplayer as a kid, or even now. This is a slot that is one for the masses and you should continue to read to find out more.

Long before Game of Thrones was a twinkle in George R.R. Martin's eye, the classic fantasy role-playing game Dungeons and Dragons was captivating kids the world over. Now decades old, the kitchen table version is still as popular as ever, but slots developers are cashing in on a timeless world of sorcerers, monsters and brave heroes.

Leading slot developer IGT's Dungeons and Dragons: Crystal Caverns, is a worthy addition to the treasure trove. A 5 reel, 20 payline slot, it features all the graphics and themes you'd expect from a classic D&D session (minus the spotty geeks with personal hygiene problems): Tordek the warrior, Bodock the, er, other warrior, and the beautiful Elf Princess - the reels are full of fantastical imagery. There's the classic 9-through-Ace card symbols, of course, plus various crystals of different colors and values.

Feel the Fire with the Dragon Wild!

The Dragon acts as the Wild, substituting for all symbols other than the Bonus Scatters - the 'Bonus' symbol, ogre, troll and skeleton. Three Bonus symbols on reels 1, 2 and 3 triggers the Tumbling Treasure feature where there are 6 free spins up for grabs and 600 in total if you re-trigger.

Fantasy game slots abound, and it's no wonder: the theme is always popular, it lends itself to some interesting imagery, and the scope for nice bonus games is always there. The game is a bit light on the bonuses side, but IGT's Tumbling Reels feature generally makes up for that. If D&D:CC has got you in the mood, check out IGT's great fantasy slots offering, Dungeons and Dragons: Fortress of Fortunes - where you get to choose your own character to journey through the game - or even the remaining instalment in the Dungeons and Dragons trilogy, Dungeons and Dragons - Treasures of Icewind Dale.