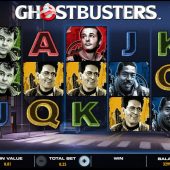 Ghostbusters Plus slot by IGT is the long-awaited sequel to their original trademarked Ghostbusters game based on the original 1984 film. The reels are set over a city street at night where no doubt we can expect some spooky goings-on and the sounds effects are present to match the scene too. IGT have done film themes before with the terrible Baywatch effort and far better Star Trek Against All Odds and this slot appears to be a decent one upon first impressions. So will we be able to bust those ghosts, or will they bust our bankroll?

We begin with 25 fixed lines over a standard 5x3 grid with symbols stacked for the characters and single elsewhere. The 5-of-a-kind pays are 40x Logo Wild, Red Character 20x, Green 10x, Yellow or Blue 8x and four card values of 4, 3 or 2x for a full line. Zuul scatters appear on reels 1,3 and 5 for our feature trigger but there's a lot more to this complex game, as it's a Level Up Plus edition. In the Ghost Battle features you accumulate enhanced Wilds and pays but before then, there's some random modifiers which are unlocked as you rise through the 10 levels.

Triggered by 1,3 and 5 scatters or via the modifiers above, gives you 5 Ghosts to tap which all award a type of Wild and which are laid out on the reels during the 5 free games. You can get a maximum of 25 spins with retriggers and Wilds can be normal, 2x, 3x, 5x 10x and 25x. You will also get the Zuul Battle after a retrigger which will activate 2 your extra spins and block or expanding Wilds. The best thing to do is watch and enjoy, as it can pay big as all your Wild multipliers and variants will be used on successive spins.

Ghostbusters Plus slot is simply brilliant for the graphics, sounds and animations and IGT have adone a great job with the theme. The RTP is 92.89-96.25% so you should have some playtime in these haunted streets and if you do, your benefits from the rising levels will make the game even more fun. The random modifiers aren't that frequent but are usually productive when they occur but the free games is where it's all at here. When retriggering some really big totals are possible too as well as being good to watch with the Wilds and effects added. I've been waiting a while to praise an IGT release, and now I have...