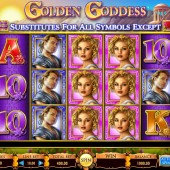 In all fairness, considering how many slots there are out there with a Greek mythology theme, IGT don’t really have too many slots that boast that theme so this Golden Goddess slot can avoid ridicule.

Get Ready for the Super Stacks!

Trigger up to 7 Free Spins

Golden Goddess does throw this Super Stacks feature down your throat but you will love it. In the same way that IGT’s innovative Da Vinci Diamonds Dual Play captured our imaginations and in the same way that WMS Gaming’s Jungle Wild re-release saw us fall in love with the slot all over again. Is it a game-changer? Not really. However, you will be hard pushed to find a better release from IGT over the next few months.