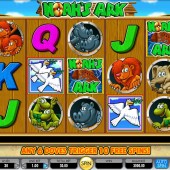 As I write this, Russell Crowe is bothering cinema crowds with his overblown depiction of the biblical character, Noah, who took off in a homemade ark as the floods arrive, taking his family and a bunch of animals who have gone in two by two. So it's fitting, perhaps, that I'm writing about IGT's online video slot based on the story.

At first glance, the Biblical-inspired slot (it would be unfair to call it 'epic') from land-based legends, IGT - Noah's Ark - seems to have been cut from the same (loin)cloth that took Playtech to developing Vikingmania and the fairytale-themed Piggies and the Wolf.

In IGT style, the 5 reel, 30 payline slot is packed with cartoonish, colorful graphics, and lots of smiling animals like doves, lions, hippos, elephants, camels and tortoises. In fact, as with the bible story, the animals on the reels come in twos as well as ones. This 'Split Symbols' feature sees you double up winning combos by using the pairs of animals icons. This way, you can bag yourself a tasty win in the base game.

The Wild is the Noah's Ark logo, and it substitutes for all regular symbols other than the single and double Doves. Not only that - Wilds also count double when substituting for the regular animal symbols (e.g. all but the doves.)

Hit five or six Dove icons on reels 2, 3 or 4 and you will activate the raining free spins bonus round. This can be achieved by hitting single or double Scatter symbols on the base game reels, so this is where those Split Symbols really come into play.

Free spins are played on a separate game screen, and contain a few special characters like a blue zebra and a goat. They can be re-triggered by hitting more doves, so five more gets you five more spins, and six doves another 10 spins.

While simple enough to play, and cute to look at, I didn’t find the Split Symbols added too much to Noah's Ark - at least, not in the base game. It's when you hit the free spins that the Wilds and double symbols really come into play.