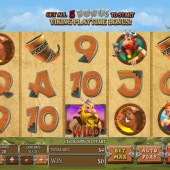 Legendary slot developer Playtech set out their stall right from the off in this Viking-themed online slot - Vikingmania - with a neat 3D intro featuring a hapless Viking practicing a bit of pillaging before breakfast.

That the main characters in this 5 reel, 20 pay-line slot look uncannily like comic book characters, Asterix and Obelix, is presumably entirely coincidental, but that's the feel you get when playing Vikingmania.

So, like the comic, Vikingmania is packed with comedy throughout.

On the reels, we get the hapless, drinking red-bearded Viking (paying out 10,000 coins for hitting five on the reels), a horn, a warthog (you'll see him being hunted very badly in the game's opening cutaway sequence), a buxom Viking maiden, an some 9-to-Ace icons that look like they've been stripped from a Viking longship.

Our chief Viking, when not plaiting his substantial blonde beard, is the game's Wild, appearing on Reels 2, 3 and 4 and substituting for all regular symbols in the game other than the Scatter and Bonus icons. Not only that, but when the Wild appears during the free spins round he expands to fill the entire reel.

Find the Maps and Earn at Least 10 Free Spins

Speaking of free spins, that bonus round can be activated when you hit three or more Map symbols anywhere.

You win 10 free spins straight off, all multiplied by 3, with a further three Scatters triggering yet another 10 spins.

In fact, technically free spins can be won infinitely - if the game blurb is to be believed. If you hit the mighty hammer icon in the centre of a reel, it will activate that reel.

Throw Weapons at a Viking to Win a Prize

Activate five reels in total this way and you'll trigger the Viking Playtime Bonus. Here, your hapless red-bearded chum is tied to a spinning wheel and you have choose weapons to happily chuck in his general direction.

Hit the target and will you bag a cash prize. The more direct hits you achieve, the greater your prize haul.

Vikingmania is sure to have thrill seekers marauding and pillaging at their nearest online casino. The graphics and atmosphere are fun, there's a breathtaking range of betting on offer ($500 line bets - juicy indeed) and the bonus rounds are meaty.

While the game may not quite hold that attention quite like a classic Betsoft or Sheriff 3D game - those developers are far more immersive with their slots - there's still plenty to recommend here. As for a couple of other fun-filled slots in a similar vein, check out Betsoft Gaming's travel-themed Safari Sam, while the same developer's own take on the Vikings - Viking Age - is a worthy alternative.