Age of The Gods Medusa and Monsters slot

Age of The Gods Medusa and Monsters slot review 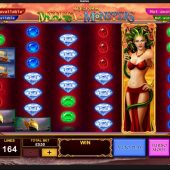 Age of The Gods Medusa and Monsters is Playtech's latest (eighth) addition ot their 'Age of The Gods' series which replaced the old Marvel Slots such as Kong and The Incredible Hulk when Disney took Marvel over and refused any gambling association. These slots were all given a like-for-like replacement in the Age of The Gods series and re-titled King of Olympus, Fate Sisters and Goddess of Wisdom to name but three.

Age of The Gods Medusa and Monsters is very different though because it's a totally new slot with a different mechanic and not a replacement for an old Marvel game. The game is set over a sinister-looking sea and the mood is reinforced with some spooky classical music and some loud drums as the reels stop. It's not quite as scary as the music on Nextgen's classic 'Medusa 2' but nevertheless is very effective in setting the mood, so will this snake-haired Gorgon manage to turn our bankroll in to stone as well?

Medusa & Monsters reminded me of those WMS 'Colossal Reels' slots as soon as I saw it, because you have 6 reels of 7 rows each and 164 paying lines, nearly as many as the WMS games with 192 lines such as Red Flag Fleet and Knight's Keep. What is unusual is that you cannot get single icons as they are stacked 2-high on reel 1 and increase incrementally to 7-high on reel 6. Wins are followed by slow graphics as they go through the multiple tiny pays and show each winning line which composes the total win, a la those WMS games aforementioned!

You pay 50-coins to play and the pays aren't quite as low as the WMS games cited; the 6-of-a-kind wins are 3x for the very busty Siren, 2x for Minotaur and 1.5x for Cerberus with the Ship, Swords or Helmet at 1x with four different gems all at 0.5x for a line of six. Medusa herself is an expanding Wild appearing on all reels and your scatter is view of the slot's background through a round mirror and these are 2 rows high.

You need to see 3 scatters appear fully or partly in view only on reels 2, 4 and 6 to trigger 5 free games. You will be presented with a screen showing 3 shields. Simply pick a shield to reveal 1 of the 3 high-paying symbols (Siren, Minotaur or Cerberus) and this becomes a sticky symbol for the duration as well as replacing the other two high-paying symbols you didn't pick.

There aren't any Wilds on the reels now either but Medusa begins fully stacked on reel 6 and moves one reel leftwards each of the 5 spins. As she does, her gaze will freeze any of your selected symbol landing on the reels. It's technically possible to fill the entire grid here before the spins end but even if you did your biggest single free game spin could only yield 492x bet and that's with the top-paying Siren selected for you.

Medusa and Monsters slot is clearly based on older games as I've stated but it isn't too bad to play and listen to and unlike some Playtech slots you get a decent 96.09% RTP too. The free games are over very quickly and mostly seem to pay very poorly with the occasional 100x plus when the chosen symbols appear in the first 2 or 3 spins on 4 or 5 of the reels, but at least they aren't too hard to trigger. The slot could have done with some kind of random in-play Wild Reels feature or something as it's quite dull between features. Did I say earlier that Medusa and Monsters is the eighth game in the Age of The Gods series? Well, unfortunately I have to conclude it's the eighth best of them too...