Age of The Gods: Furious 4 slot 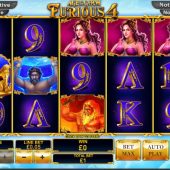 Furious 4 slot, as some may have guessed if regular Playtech players, is the replacement for the classic 'Fantastic Four' game lost when the Marvel series copyright went to Disney. If you missed that slot don't worry as this has the identical game engine and what appears to be improved graphics and sounds. The Age Of The Gods (AOTG) series is designed to replace all those Marvel games, for example Iron Man 2 has transformed into AOTG King of Olympus now and they have the 'Ultimate Power' 4 progressives available as before. So will these 4 Gods have a fantastic effect on your bankroll, or will you leave the game in a state of fury yourself?

The game has nice purple reels set against a backdrop of clouds and as before we have 20 pay lines over the 5 reels of 3 rows. The game is essentially simple until we get to the bonus where all the action occurs - the 4 Gods are the best pays aside from the Wilds represented by the traditional golden '4' which pay 500x bet if you're granted all 5 on a pay line. Apollo awards 100x for a 5-of-a-kind line, Pandora 75x, Hephaestus 50x and Atlas 37.5x while the card values are 12.5 down to 5x stake for the 5. The symbols are all single until we get to the bonus game. for which we need 3 or more Golden Throne scatters anywhere in view.

Regardless of how many scatters land, you are awarded 12 free games which have the 'Furious Features' enabled. You can't retrigger them but to ensure you get a chance, any Furious Feature will grant 3 or 4 more spins. On the centre reel the 4 Gods all appear stacked and you need them to land filling the whole reel for their respective furies:

Apollo - grants you 4 Age of Light spins where he becomes an extra Wild and also an expanding one.

Pandora - grants you 4 Age of Curiosity spins where every time she appears your multiplier for the total result of those 4 spins will increase 1x.

Hephaestus - grants you 4 Age of Fire spins where he will fill the whole first reel for all the spins and replaces all instances of the other 3 Gods on the reels.

Atlas - grants you 3 Age of Endurance spins where he becomes a sticky Wild.

You can trigger none, or if you're lucky multiple Furious Features in any free games bonus.

Furious 4 slot is a credit to the original whereby it could have been easier to clone it with inferior graphics and minimal effort, but Playtech have made it look good. The RTP is 94.88% which includes a 0.99% progressive contribution and the free games set-up is one of the best out there, both with excitement and potentially big hits. The pays for the Gods in the base game too are quite high and with the positioning of the Wilds you can actually hit 2 full lines of them at once, as I did when testing it! These 4 Gods may not be as angry with you as they let on...