Age of The Gods Ruler of The Seas slot

Age of The Gods Ruler of The Seas slot review 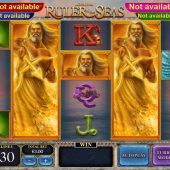 Age of The Gods - Ruler of The Seas slot by Playtech is one which we know at the outset will provide some action and colour simply by the title. The Age of The Gods series is one which this developer has made plenty of effort with in both mechanics and drama as a leading product. If you have played any of the others like Mighty Midas, Furious 4 and Rulers of Olympus which were like-for-like replacements of the DC Comics games like Fantastic 4 then you'll see what I mean. Here we have a transparent reel set lying over a shimmering sea in the evening sky and the matching dramatic classical soundtrack one would expect for this ancient theme, so will red sky at night be bankroll delight?

There are 30 paylines over 5 reels of 4 rows on Age of The Gods - Ruler of The Seas slot with stacked symbols present and I promise you, there's a lot of action possible here! You pay 30 coins a spin and the 5-of-a-kind pays yield 250 coins for the Wild, 100 Poseidon, 60 Athena, 40 Medusa, 20 Cyclops or Pegasus with five card values paying 16 down to 10. Trident scatters appear on reels 1,3 and 5 but here we get some modifiers for just two of them in view too and on each play there is the old spectacle of one symbol visibly super-stacked on the reels as they spin.

Should only 2 scattered Tridents appear you will get one of 5 respin modifiers for each of the character symbols. In all cases the reels expand to 6 rows and you get 60 lines in play instead of 30 and you'll see a highlighted frames around some of the tiles.

Poseidon - any high-pay symbol landing in a tile turns all incidences of it into Wilds.
Athena - land a Wild in any highlighted tile to turn all adjacent tiles Wild
Medusa - each frame gets a multiplier of 2x to 5x allocated to it and any win using the frame will have it applied, if two are in play the highest one is used.
Cyclops - any Wild landing in a frame makes that whole row Wild.
Pegasus - any low-win symbol landing will transform all the other low-win symbols into the same one. If two land, all the low-win symbols will become the highest one.

You need the Trident scatters on reels 1,3 and 5. You get 5 free spins and you'll be awarded one of the 5 characters as above in the respins. You get 5 spins in all cases and can retrigger them or get 3 more for 2 scatters. Each of the triggering scatters leaves a feature frame in the position it was in, the game may award you some more at the start and your subsequent scatters for retriggers or extra spins also remain as extra frames.

Age of The Gods - Ruler of The Seas slot is very good as regards graphics, sounds and animations and you will also see the Ultimate Power progressives in play above the game if you're very fortunate to get the randomly triggered picks rounds for one of them. The respins features can pay quite well but these is some good potential on those rare occasions free games bonus comes up with the goods. This is a new mechanic to the series and a worthy addition to AOTG as like the rest plenty of effort has been spent on the final result. You have a decent 96.37% RTP which includes the 0.99% jackpot contribution. It could well pay you to try and rule the waves here...