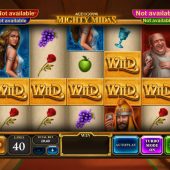 Age of The Gods Mighty Midas slot is actually a new mechanic applied to the AOTG series. Previously, the AOTG games were replacements for existing Marvel slots such as Fantastic 4 and Iron Man 2 etc. created when the Marvel licence could no longer be used. This resulted in those Marvel games being cloned under a new AOTG title, with slots such as Fate Sisters, King Of Olympus and Furious 4. Here we have a new God added to the series with our reels set over a luxurious ancient Greek hall and some gentle classical music to spin to, with all the trappings of prosperity on display. Now we know Midas had a knack for turning all he touched into Gold, but will his touch extend to our bankroll too?

We have a 40-line slot over 5 reels of 4 rows each on our Mighty Midas slot and Playtech tell us 8,650x bet is possible too! The lower symbols are single although 2 can appear on any one reel, the higher God symbols are double-stacked. It costs 40 coins to play so the pays for 5-of-a-kind are 500 coins for the Yellow Warrior, 400 Red, 300 Green, 200 Blue Lady and 150 for Adonis in Purple. There aren't any card values here which is a welcome change so we get wins ranging from 125 down to 75 coins for the items of the feast which are the Chicken, Rose, Apple, Goblet and Grapes respectively.

We can see single Wilds on all reels but most important is the Golden Midas Finger on reels 3,4 and 5. If you were wondering why Midas doesn't appear in
the symbols described above, now you know. The finger points leftwards and whichever symbol is directly adjacent to it turns to a Golden Wild in all instances on the grid. Now the great thing here is that the character symbols are double-stacked as mentioned earlier, so if the Midas Finger points to one of those, they become double-stacked Wilds if fully in view. His generosity still isn't finished as if he ends up pointing to a Wild, it will gain a 2x multiplier. If the finger appears twice and then the second points to a Wild changed already by the first finger to a 2x, it then becomes a 3x. It's rare, but can happen.

This is a 5-segment wheel appearing on reels 1 and 5 and both appearing in one spin will request you to spin the wheel and win one of 5 colour features:

Emerald Bonus - the scatter on reel 1 reveals a cash prize, the one on reel 5 then reveals a mutliplier.

Ruby Spins - free games where any Golden Wild created will get a multiplier of 5,10,15,20,25 or 30x! If you get a second finger pointing to this multiplier Wild, the mutlipliers will be added, but cannot exceed 30x.

Amber Spins - the next 5 spins will be paid for and not free, but each time a double-character symbol will randomly be selected to become a Golden Wild with a maximum 3x multiplier applied.

Amethyst Spins - all Midas Finger symbols on the last 3 reels are double-stacked with the potential multiplier limited to 3x.

You also see the Playtech Progressive AOTG jackpots on Mighty Midas. These are randomly triggered and have 4 levels of power, extra power, super power and the huge Ultimate Power one which can be millions!

Age of The Gods Mighty Midas slot is a worthy addition to the AOTG series. The game is good visually, especially the animations and the Midas Finger makes a great in-play feature between triggering those bonus rounds. The RTP is 96.34% which includes the 0.99% progressives contribution and of course you can win 4 different free spins bonuses, all of which have some significant big-win potential. The only problem is the Emerald Cash bonus; you really don't want to be getting that after waiting for the trigger as it's pretty awful despite a maximum 500x pay being possible. This is the only negative here and is quite annoying considering the other 4 chances all contain free spins where as I said the real potential lies. Nevertheless, I cannot wait until I walk these golden halls again.....