Age of The Gods slot

Free Age of The Gods slot

Age of The Gods slot review 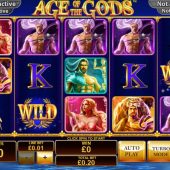 Age of The Gods slot is the title game of a whole Age of The Gods (AOTG) series that game developer Playtech have created to replace the old Marvel games like Iron Man 2 and Fantastic Four. In this instance we get a new game centred around four Gods from Greek mythology as with AOTG Furious 4 slot, with the reels set against a backdrop of an ancient mountain city and dramatic music to accompany us on our quest. The Ultimate Power progressives are linked into this game so the players of the Marvel games of old will still have the chance to hit that elusive mega-win too. So can you reap the rewards of these mighty figures, or will winning prove to be a Herculean task?

The impressive graphics offer us 20 paying lines over 5 reels and you would like to see all 5 Wilds on one of those lines as a heavenly 500x bet is your prize. Hestia (red icon) is the best standard icon at 50x bet for a full line, and then Poseidon and Zeus 25x, Hercules 20x ending with Athena and Ares paying 15x for the full 5. The lower pays are the Golden Helmet at 12.5x and the card values paying 7.5x. The Gods also have a special treat for you - if Hestia, Zeus, Poseidon, Hercules and Athena all land on a paying line in any order you get a special 200x bet 'Pantheon of Power' award, similar to Netent's Wild Water with that game's 5 characters! Their best rewards are kept back for a rather interesting bonus game though.

Spins from the Gods

You need to see 3 scatters formed of the game's icon anywhere in view to trigger 4 different types of free spins. You will be faced with a grid of 20 Gold Coins and keep picking them in order to match 3 of the same God but beware!! as you may pick Hades, God of the underworld and be returned to the reels with nothing! Each God has a special enhancement for your spins:

Athena - 9 free games with a random multiplier of 2-5x shown before each spin begins.

Zeus - 9 free games with the first three played at 1x, the second three at 2x and the final three at 3x multiplier.

Poseidon - 9 free games where lightning fires on any random spin from Poseidon's trident to turn up to 5 positions Wild.

Hercules - 9 free games and he appears as a Wild reel 3 for all spins.

You go back to the grid to carry on picking Gold Coins after your games finish, and this may result in a second or even third type of free games all in one trigger if you don't discover Hades first!

Age of the Gods slot is well worthy of the fine title it has with some great graphics and animations to impart the power of its subjects. You don't get random in-play events but the chance to have 2 or more bonuses in one trigger adds to the tension as you embark upon the coin picks when the feature has arrived. There is a decent 95.02% RTP which includes the progressive contributions and the base game pays can often benefit your bankroll just on their own. It may just pay to offer some of your balance as a sacrifice to these fine Gods...