Age of The Gods: Goddess of Wisdom slot

Free Age of The Gods: Goddess of Wisdom slot

Play Age of The Gods: Goddess of Wisdom now

Age of The Gods: Goddess of Wisdom slot review 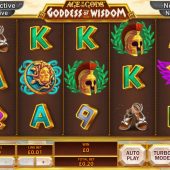 Goddess of Wisdom slot was designated to replace Elektra slot in the now expired Playtech Marvel series. In keeping with the Age Of The Gods (AOTG) theme we are back in Ancient Greek Mythology and as with the Fate Sisters game we have the female side of it represented here, this time by the daughter of Zeus, Athena. Now Athena is the Goddess of many things including reason, intelligent activity, arts and literature and we need this knowledge to fend off the attacking forces of the snake-haired Gorgon and her forces of evil. So can Athena keep our bankroll safe as the city comes under attack?

The 5x3 reels grid is situated between columns at the gates to the city and we can see the defending forces in readiness with militaristic music to leave us in no doubt as to the danger beyond. We get Wilds on our 20 pay lines but only on the centre 3 reels and Athena naturally features on them. The dangerous Gorgon does have one advantage, paying a sizeable 250x bet for the 5-of-a-kind before both the Wings and Helmet at 50x and the Shoes and Olive Branch at 25x. The 6 card values pay 5 to 10x for a full line with the final icon being the White Owl scatter of which 3 or more in view will trigger the start of the battle.

Once triggered you can choose from three modes in this round. You select one of three icons and in all cases the chosen icon will replace the other two you ignored on the reels. There are no second chances in this battle, no retriggers.

Gorgon - quite simply 10 free games and as with all three choices, the Wilds will expand during them. The Gorgon is by far the highest paying icon so this has some potential when she replaces the other two symbols on the reels.

Golden Helmet - 7 free games, expanding Wilds and 4x multiplier on all wins with other two symbols replaced by the Helmet.

Golden Breastplate - 14 spins with expanding Wilds and a 2x multiplier applied to all wins, other two symbols replaced by this Breastplate.

Goddess of Wisdom slot was simply an exercise by Playtech to replace the old Elektra graphics and animations with something different. As with all the AOTG series this has been done well and maintained the high standards of the original, with some spectacular effects and animations and of course the Ultimate Power linked progressive. A choice of free spins is always welcome to the player as has been proved by the popularity of Netent's Jungle Spirit game and like that slot we get the additional chance of some sizeable base game hits. With the 94.94% RTP and Athena's Wisdom, I'd say you bankroll should be quite safe on the right side of these city gates...