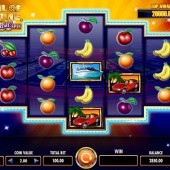 There is no denying that Wheel of Fortune is a television institution. Ever since the first episode screened back in 1975 with Chuck Woolery as the presenter, it is a game show that has invaded living rooms across the globe with over 60 international adaptations. So it is no surprise that US-based slots developer IGT has taken the Wheel of Fortune brand and made it its own on the slots market.

Win Bigger with Multiway Xtra
Well, to start with, we see that this version offers the IGT exclusive feature of Multiway Xtra. This is something that you will have come across a number of times if you've played IGT slots before. Popular titles including the intense Prowling Panther and the classic Fire Opals are just two slots in the IGT portfolio that boast this superb feature. For those unfamiliar with Multiway Xtra, it pays out on any combination of symbols (720 on this slot to be precise) either left to right or right to left. Wins through Multiway Xtra are also multiplied by the coin value. You can hit some decent wins because of this so trust us, it's not just a gimmick feature.

There are a vast array of symbols across the reels on this slot. There is the Wheel of Fortune logo, a speedboat, emerald necklace, convertible car, and instead of the regular 10-through-to-Ace symbols we have different fruit in the form of plums, cherries, apples, oranges, and bananas.

The Wild symbol is present on the reels. It only appears on reels 2, 3, and 4 but substitutes for all other symbols, except the Scatters, Bonus symbols, and Wheel of Fortune logo symbols, to complete any potential winning combinations on the reels on a single spin.

If you manage to hit three or more of the Scatters across the reels then you will trigger the Mini Wheel Bonus. This bonus feature gives you the chance to earn a win up to the value of 3,850x the coin value. Mini by name but certainly not mini in terms of the potential prize pay out.

Earn up to 5,000 Coins with a 10x Multiplier with Triple Extreme Spins

There is also a second bonus feature and this is triggered by the Bonus symbols. If you hit three or more of these along the five reels then you will trigger the Triple Extreme Spins Bonus. First, you will be asked to pick from a number of coloured envelopes. The number of picks you receive depends on how many Bonus symbols you used to trigger the feature. The envelopes will then reveal either a red, blue, or yellow wheel pointer that correspond to the three wheels used in this feature.

After all the picks have been made, you will then be asked to press the “Spin” button and the bonus feature begins. When the wheels stop, the combined values that the pointers land on are added together and a total prize payout is awarded from the three wheels. The blue wheel can pay out up to 1,000 coins. The red wheel can pay out up to 5,000 coins. The yellow wheel offers a multiplier value to the combined winnings of the blue and red wheels up to a 10x multiplier value.

Wheel of Fortune – Triple Extreme Spin is just as confusing for new players as the previous Wheel of Fortune incarnations. This early confusion is perhaps why the branded slot has never taken off as you might expect from a slot that is based on such a globally recognised brand. However, this is a step in the right direction for IGT after the disappointment of Wheel of Fortune – Triple Action Frenzy. The Mini Wheel Bonus feature is a nice little mini feature to see included and the main bonus feature with the three wheels is fantastic. I am a big fan of the Multiway Xtra set up too. As I said, the trouble is that this is not newbie friendly and that could put people off before they've even started playing this slot.