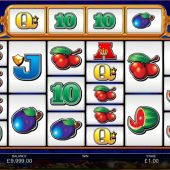 Reel King Megaways slot by Inspired Gaming is their second Megaways edition after the jolly decent Centurion Megaways  slot. It is based on the old UK amusement arcade classic Reel King by Astra Games, later transposed to the online format by Novomatic. It retains it's simple looks, the same inane sounds and basic appearance of white reels over a blue background which we see whilst waiting for those portly kings to trigger. So will Reel King prove to be a real sting for our bankroll, or not?

We get 324-117649 ways on Reel king Megaways slot with the pays for 6-of-a-kinds the same as Bonanza Megaways. Cash Bags 50x stake, Ace 7.5x, K or Q 2x, J or 10 1.75, 9 or Melon 1x and finally Plum at 0.9x and Cherry at 0.8x. There are no scatters because we don't need them and Wilds appear only on the top scroll of 4 symbols, with winning symbols removed for replacements to cascade down on each reel from above. So pretty standard Megaways stuff so far.

If you know the original game you will remember the 'Dings' that may occur as each reel stops. Should you get a ding on every reel, then 1 to 5 Reel King mini slots are revealed which awarded cash spins, with a limit of 25x bet on each unless you landed 4 or 5 of them, in the case of 5 you usually got the 500x top prize before any dead spin killed off each individual slot. Here we have 6 reels though and you need to get them all yellow to trigger the Reel King. Each Ding will make a reel yellow and also any winning action will add another yellow reel. The meter on the left tracks your progress and awards the feature depending on how many steps you make:

Reel King - just the minimum 6 steps lands you at least one Reel King mini slot and a trail of 4 dead spaces then in steps of one, 8 to 15 free games.
Super Reel King - if you get 6 yellow reels plus another winning action, you will trigger this with 7 on the meter. Here you get 4 dead positions, then 8 to 20 spins on the trail.
Mega Reel King - you don't get any dead spaces, but the first 3 all award 8 spins, then 9 through to 25 free spins on the trail.

The mini Reel King slots have some yellowed positions on their reels and each time you land 3 yellows you progress one step along the trail, even if the yellows don't contain a win. This is on top of various 7's wins they produce paying 1 to 10x on the reels. Any losing spin without yellows kills the mini slot, but you can also get both yellows and a win. Get to the free spins and then you get a standard increasing multiplier format. You also now get the reels to turn red for every winning action, fill all 6 and you get a Reel King with 2 panels which awards 1 to 3 extra spins and 0-2x extra multiplier. The results of the free spins seem to be poor mostly.

Reel King Megaways slot keeps true to the original formula and integrates it into Megaways well. The graphics, sounds and animations are simple too and also in keeping with the old game, as well as a decent 96.23% RTP. It's downhill from here though with it being hard to get to 6 on the trail to even hit the lowest Reel King feature. When you do, if you only get one Reel King mini slot then it's almost certain you won't get 4 yellow spins in order to get to the lowest 8 free spins on the trail, thus ending up with a trashy little win of 5 to 15x. When you do get the free spins, it takes most of them just to hit the 6 red reels in order to get one or two extra spins which then won't be enough to refill the red reels. Yes, you can win big theoretically in the free games, but it's such a grind getting there that I will never bow before this tight old king again...