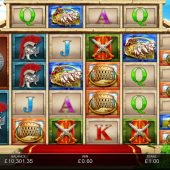 Centurion Megaways slot by Inspired Gaming is their first foray into this mechanic and they've made a decent job of it with a feature packed game as with Blueprint's Genie Jackpots Megaways slot. A rural Roman Villa makes the background and we get all the right soundbites and music of the period as we play too. The game is more complex then their other edition, Reel King Megaways slot and the full title is Pythonesque Centurion - Maximus Winnus, so will it be bankroll maximus for us?

We have a scrolling top reel of 4 symbols and 2-7 rows randomly on all 6 reels hence 324-117649 ways are possible on Centurion Megaways slot. The pays are identical to that of Bonanza Megaways slot with the 6-of-a-kinds paying 50x for the Game Logo, 7.5x Chariot, 2x Colosseum or Crossed Swords, 1.75x Helmet or Coin with four card values of 1 down to 0.8x. Winning symbols are replaced from above, Wilds can appear on the top scroll only and Bonus scatters on all reels. What about this Centurion lurking in the bushes on the bottom right though?

When the Centurion emerges and blows his trumpet, one of 5 modifiers are awarded:
Super Bonus Reels - Adds many more Bonus scatters to the reels for the spin.
Big Win - a win of at least 20x stake is given.
Minimum Ways - he will ensure the spin has a high number of ways.
Maximum Ways - you get a 117649-way spin,
Mystery Symbol - gold question marks are added which reveal the same paying symbol and you may or may not win.

You get 3 or more scatters and you spin a wheel to decide your bonus, the lowest-value feature is removed from the wheel each scatter over the 3 that lands.
Prizes on Parade - a cash trail where you get awards, collect or the next bonus up the ladder. Max win 43x bet.
Super Prizes on Parade - same as above but maximum 63x attainable and you can get Caesar's free spins.
Caesar's Free Spins - 6-12 free spins, increasing multiplier that can begin from 1,2 or 3x.
Super Caesars Free Spins - 816 free spins, beginning at 1,2,3 or 5x multiplier. In both cases, 3 or 4 scatters landing on the scrolling row awards 5 or 10 extra spins.
Wild Power Spins - 3 spins in which the Centurion delivers a sticky Wild reel to reel 2 on the first, reel 3 on the second and reel 4 on the third.
Super Wild Power Spins - same as above but 4 spins and Wild reel 5 is added on the fourth. The Wild reels have multipliers of 2,3,4,5 or 6x on them in both cases, cascade replacements are disabled as it the scrolling reel above. This is the feature you ant, with huge potential!

Megaways slot is a really involving and creative use of the Megaways mechanic with a decent base game and RTP of 95.90%. Modifiers come in often enough to keep the balance in order although the bonus can be hard to trigger. The one single drawback is the fact you aren't guaranteed free spins when you do trigger it and if you gamble from the lower 2 features, a cruddy cash-award is a 50% chance in the outcome. The appearance isn't childish, the graphics and animations are fine and don't tire you and of course the top feature can pay a huge amount, although its rare for the Bonus Wheel to select it straight off and you will likely need a gamble or two. I say get into the arena and take on this Centurion...