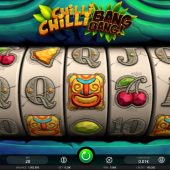 Chilli Chilli Bang Bang slot from iSoftBet is the latest in a series of slots recently by various developers centred around this famous mouth-burning pepper. Extra Chilli by Big Time Gaming, Konami's Chili Chili Fire and the older games such as Aristocrat's More Chilli and Amaya's Chilli Gold indicate we can't get enough of it! The theme here is bit different though as despite the name it appears more Aztec with a jungle background and stone cylindrical reels set in the mouth of a stone idol with the predictable pan pipes music as we play. A juvenile graphic of a Shaman in the form of a kitten bobs about on the left of the reels and the only chilli's we see are three small red ones on its necklace. So how is Chilli Chilli Bang Bang going to spice up your bankroll?

As said the reels are depicted as stone cylinders with the card values carved into them and the other symbols being old-style ones such as fruits. There are 5 reels of 3 rows each and the symbols can appear more than once in view on each reel on this 20-line game. The low pays indicate this isn't a very volatile slot; Bells award 10x your 20-coin bet (200 coins) for a 5-of-a-kind win followed by both Cherries and Lemons at 150 coins. The five card values award 100, 40, 30, 20 and 15 respectively and that's all the basic icons you get!

Single Wilds do appear on all reels and these can award an in-play random feature - when appearing on any of the centre 3 reels they may hold and expand one position adjacently in any direction for the next spin until the expansion has reached 4 positions in size. You may also see the centre 3 reels have huge stacks of Wilds added for a guaranteed win and these two random events will also feature in the game's bonus.

The great thing here is that the Bonus Wheel will guarantee you one of the three different free spin formats so none of my pet hate on any slot, the dreaded 'cash prize' when you want to see a feature. The Gold Bonus scatters are on reels 1, 3 and 5 and you do get a slow spin if the first two land but with a twist - if the third one doesn't land you will get a multiplier of 2 to 10x applied to the 1x bet award for a 2-scatter win and any other pay that could appear simultaneously.

Once you do land the 3 scatters you will see a wheel spin twice. The inner circle awards a Wild feature and then the outer circle a spin amount of 5 to 20. The three types are:

Growing Multiplier spins - any scatter in view on any spin will increase the multiplier by one, up to a maximum of 10.

Stacked Wild spins - huge columns of stacked Wilds are added to the centre 3 reels and each spin you should see either 2 or 3 of those reels with at least one Wild in view although it's not guaranteed. You cannot retrigger this one.

Wandering Wilds spins - any Wild landing in view will wander in any direction in a random pattern until it moves off the screen, and each position it crosses will become a sticky Wild in its wake.

Despite the basic appearance and cheesy theme Chilli Chilli Bang Bang slot is quite fun to play. You get a good 97% RTP but you'll never see any huge hits because as I mentioned earlier the volatility is quite low. Features are thus very frequent, both the random Wild ones and the triggered Bonus Wheel. Graphics and sound effects aren't too intrusive despite the childish appearance and it seems to go on some decent streaks when in the mood which can build up your balance nicely. Like real chilli it's not something you'd want to have every day, just occasionally when in the mood...