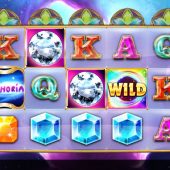 Euphoria slot by iSoftBet is one of their Extreme Pays series which means volatility and high potential. The background has some kaleidoscopic graphics of moving colour swirls and we get space age synthesized music and sound effects as we spin the basic gem symbols on the reels. It's definitely got a Big Time Gaming influence if you check out the graphics and is quite like their Wisps slot in as much that it is a basic Starburst style game but with a few bells and whistles as we shall see. Will will be euphoric at the effect it has on our bankroll though?

On The Reels...
We have 243-ways to win as with the aforementioned Wisps slot with stacked symbols on Euphoria slot too. We pay 30-coins per play and the Diamonds are the highest 5-of-a-kind at 400 coins, Purple Gem 200, Blue Gem 100, Green Gem 80, Orange Gem 50 with four card values paying either 40 or 30 coins. The Euphoria symbol appears on the odd reels, Wilds on all 3 centre reels singly and randomly up to 3 Wild Multiplier Stars can appear on the grid on any win, with either 2 or 3x multipliers attached so 27x is possible. It's all about the free games to unlock that potential though!

Free Spins
Having landed the Euphoria symbol on reels 1, 3 and 5 you get 8 free games with no retrigger but there is the slim possibility of earning 5 extra spins though. You will now see those Wild Stars added to the reels and each time one lands, it's position will display initially 2x above that reel and that will be your win multiplier. Obviously if 2 or 3 come in, there will now be a 4x or 8x multiplier in play. Should another Star appear on the same reel, the stored Multiplier above that reel on the Star changes to 3x. You get whichever multipliers are in play, which multiply each other. Should you land a Multiplier Wild Star on all 5 reels, you get 5 extra spins like you would on Netent's Dead or Alive. If you developed all 5 Stars to 3x then you would have the maximum 243x multiplier in play for any remaining spins.

Our View...
Euphoria slot is quite entertaining with good sounds, graphics and a base game the befits the 96.00% RTP. The feature usually pays quite well although it would be exceedingly hard to get one of those 'Extreme Pays' by landing the 5 extra spins which would mean a minimum 32x multiplier in play. If you're a fan of Starburst-style slots then this is a cut above the rest and well worth a bash...