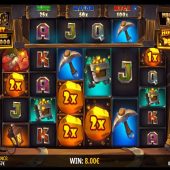 Gold Digger Megaways slot by iSoftBet is a stocking-filler Megaways which would be placed somewhere in between their first one Aztec Gold Megaways and the dreadful Piggy Bank Megaways both in playability and potential. The mine background and symbols along with the soundbites are taken from their old 20-line Gold Digger slot naturally. So can we be diggin' up some nuggets for our bankroll here or will this seam be mined out?

On the reels...
You have 324-117649 ways with 2-7 symbols per reel on Gold Digger Megaways and a row of 4 tiles over the middle where the Wilds can appear. The top symbol is Miner at 25x bet for 6-of-a-kind on Gold Digger Megaways with Cart 5x, Pick 1.75x, Lamp 1.5x and four card values of 0.75 down to 0.5x. There's stacked and single symbols with winning tiles replaced from above in cascades and the last symbol is the Nuggets displaying a cash value. There are 4 random modifiers if the Miner on the left activates: Max Megaways spin, Lose-to-Win, Mystery TNT symbols and Extra Nuggets for guaranteed feature entry to iSoftBets generic Hold-and-Spin feature format.

Hold-and-Spin Bonus
The bonus mechanic here on Gold Digger Megaways is the round of 3 resetting re-spins collecting nuggets displaying either cash amounts or fixed jackpots. You require 5 Nuggets or more to trigger beginning with the initial ways of the triggering spin. You can land cash values of 1-10x, fixed jackpots of 25, 50 or 100x too any one of these or a modifier will reset the 3 re-spins. You won’t get a multiplier for filling a column up but there are 5 modifiers possible:
Arrow - adds a row to its column
Heart - awards one extra life
$ - adds 1x to every value on the screen
X - Multiplier which adds each time to be applied at the end
Boomer's Boost - he's the daft dog here and might appear when you think it's all over to reveal a Nugget or modifier under a blank space to restart the re-spins

Our View...
Nothing new really here from iSoftBet on Gold Digger Megaways as it's a cross between the two games mentioned in the first paragraph. The RTP is 95.97% but using the 75x bonus buy if available to you will increase it to 96.86%. I suppose the base game modifiers make a pretty low-potential game more fun with the odd decent win but otherwise it's quite tiresome to play. The same goes for the same old Hold-and-Spin feature which they've tried to spice up with more modifiers. You don't have the potential of Aztec Gold MW but it's not a pathetically low in chance as the awful Piggy Bank MW was. It's really a volatility bridge between the two. I can think of better places to dig out a fortune than here I'm afraid...