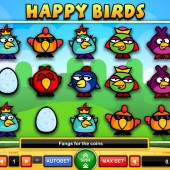 Everyone likes some comedy birds to spice up their gaming experience. That's if the Angry Birds phenomenon is anything to go by. More people on Earth catapult furry birdies in the general direction of evil pigs than own mobile phones (or something) so it's no wonder the slots developers have got in on the act. Also tapping into a market of cheery feathery friends populated by the Rio animated films, iSoftBet's Happy Birds slot is packed with smiling parrots, cute budgies and cheeky parakeets.

Happy Birds is a 5 reel slot using the 243 ways to win format, but with a maximum bet of $12.50 you won't be breaking the bank on each spin. In terms of birdie icons, on the reels we get a canary, a toucan and a parrot, plus some standard cartoony 9-to-Ace card symbols.

Birdspotting for the Parakeet Wild

The parakeet acts Wild, substituting any regular symbol other than the Scatters to complete potential winning combinations that might appear across the reels on a single spin.

Shoot the Balloons to Win Prizes

Look out for the Birds Bonus icon. Three or more of those anywhere on the reels will trigger a second bonus screen where you get to shoot down balloons hanging from a tree. Depending on which balloons you fire down you will win free spins and multipliers. This is a great interactive feature to see. Having reviewed a large number of generic titles form the big developers that lack an interactive bonus feature this goes down very well in my books.

Land the Magic Hoop icon on reels 2 and 4 at the same time, meanwhile, and you will also win free spins, this time determined at random before they play out. A great little addition but the fact the free spins are random mean that you could be in for a very frustrating session if you hit a low number of free spins despite triggering the feature a number of times.

You can tell Happy Birds is a new title: it has some seriously slick graphics and gameplay, with a Skill Stop function that actually seems to work (unlike some other slots games) and a nice overall atmosphere. Luckily, iSoftBet are rushing out several titles, and if you're a fan of the firm's slick, no-nonsense approach to slots, you should enjoy another game with comedy animals - the big movie tie-in of Rango - plus the action-themed insect fest of LadyBug. Both games should give you a better idea - if any were needed - of what iSoftBet are all about.